Ebola cases slow in Liberia, but too soon to celebrate: WHO 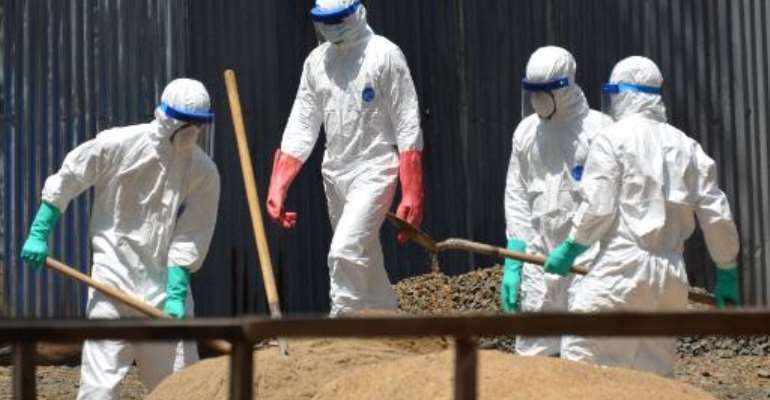 Workers from the Liberian Red Cross at ELWA 2 Ebola management center in Monrovia on October 23, 2014 shovel sand which will be used to absorb fluids emitted from the bodies of Ebola victims. By Zoom Dosso (AFP)

Geneva (AFP) - The rate of new Ebola infections appears to be slowing in hard-hit Liberia, but the crisis is far from over, according to the World Health Organization.

"It appears that the trend is real in Liberia and there may indeed be a slowing of the epidemic there," WHO assistant director-general Bruce Aylward told reporters in Geneva.

"There is increasing evidence that these countries can get on top of this," he said.

Aylward added, though, that he was "terrified that the information will be misinterpreted and that people will begin to think Ebola is under control."

"That is like thinking your pet tiger is under control," he warned, pointing out that the deadly outbreak had seemed to slow previously, only to come back with more virulence.

The Ebola outbreak that has been ravaging west Africa has claimed 4,922 lives, according to the latest update from the WHO. The vast majority of deaths were in Liberia, Guinea and Sierra Leone.

Washington has ordered a 21-day quarantine for all US troops returning from west Africa, as controversy raged over the US government's attempts to prevent the spread of the disease.

Panic has gripped many Americans since a Liberian citizen brought the killer virus into the country and died on October 8 of the disease in a Texas hospital.

Members of the west African community in New York have complained that their children are being bullied at school and businesses are losing money because of the hysteria.

The quarantine move exposed a split between the US military and other government agencies, with civilian health workers subjected to less strict measures than American soldiers.

President Barack Obama on Wednesday hailed "heroic" US health workers battling Ebola, as he sought to reassure the public amid the controversy.

Speaking at the White House after meeting with returned health workers including Kent Brantly, an American doctor infected in Liberia, Obama said those who volunteer on the front lines "deserve our gratitude, and they deserve to be treated with dignity and with respect."

He defended the "sensible, scientific" guidelines set out by the US Centers for Disease Control and Prevention on Monday.

The CDC has urged active monitoring of those at risk, meaning they must be checked for fever daily for 21 days and must restrict their travel and public activities for the duration of the virus's incubation period.

Aylward said that the number of Ebola cases registered worldwide had soared to 13,703 -- up from just over 10,000 the WHO reported on Saturday -- but he stressed the increase was mainly due to previously unreported cases being added to the statistics.

Neighbouring Mali, where a two-year-old girl died from Ebola following a long bus ride from Guinea, had not yet detected any new infections, he added.

Aylward said data from a range of different sources -- including from funeral directors and treatment centres reporting lower Ebola patient admission rates -- indicated a "downward trend" across much of Liberia.

A rapid scaling up of information to the community about the deadly virus, contact tracing and implementation of safe burial practices had likely contributed to the positive trend in Liberia, Aylward said.

His cautious optimism on Liberia came a day after Obama and the Red Cross offered hope that progress was being made in the battle against the killer virus.

Obama insisted the disease "will be defeated".

There has been growing condemnation of Washington's rush to quarantine people who have come into contact with those suffering from Ebola, amid fears such strict measures could dissuade much-needed healthcare workers and others from travelling to the region.

Only two people have been infected with the virus on US soil, and both have been declared cured.

Nonetheless, California announced a new 21-day quarantine for anyone travelling from Ebola-afflicted countries who has had contact with someone infected with the disease. The move comes after similar measures were adopted in New Jersey and New York.

Pentagon chief Chuck Hagel said the three-week quarantine for all US troops returning from west Africa was a "prudent" measure adopted partly at the behest of military families.

There are now about 1,100 US troops in Liberia and Senegal, with plans to boost the force to as many as 4,000.

World Bank chief Jim Yong Kim will visit the UN Mission on Ebola Emergency Response (UNMEER) headquarters in Ghana on Thursday for talks on the epidemic and its economic impact on the region.