Zambia in mourning for president as US urges peaceful transition 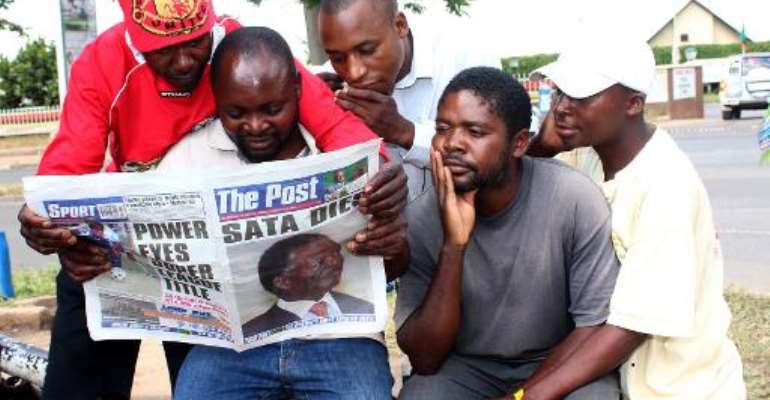 Taxi drivers read the news of President Michael Sata's death in The Post special edition on October 29, 2014 in Lusaka. By Chibala Zulu (AFP)

US President Barack Obama led the international condolences, while urging the southern African nation to conduct "a peaceful constitutional transition of power as the country moves forward during this time of sorrow".

Even though officials had long denied he was sick, Sata, 77, died Tuesday while undergoing treatment in London's private King Edward VII hospital for an unspecified illness, the Zambian government reported.

Sata, nicknamed "King Cobra" for his sharp rhetoric, died only days after Zambia celebrated half a century of independence.

Officials had long denied Sata was sick, even prosecuting journalists who questioned his long "working vacations" to Israel and elsewhere.

Some Zambians responded to the news by asking why he died in an upscale foreign hospital and expressed anger over government secrecy, including claims he was going to London for a check-up.

"They knew well that he was going to seek medical attention. You can hide sickness but you can't hide death. Now the whole world knows that the man has died in hospital."

In the hours following Sata's demise it was unclear who would lead the country, or his Patriotic Front party, which has been accused of creeping authoritarianism.

Sata had named Defence Minister Edgar Lungu as acting president before he left for Britain, despite doubts about the constitutionality of that move.

But it later emerged that Sata's deputy Scott, 70, will take the reins until elections are held within 90 days.

Scott -- whose parents came from Scotland -- becomes the first white president of an African nation since FW de Klerk ruled apartheid South Africa more than 20 years ago until 1994.

But he is not eligible to stand in upcoming elections, thanks to a constitutional rule barring presidential candidates whose parents were born outside Zambia, a former British colony.

In an address to the nation Scott vowed to uphold the constitution and announced a period of mourning.

"We will miss our beloved president and comrade," he said.

Sata was elected in 2011 to preside over his landlocked, southern African nation of 15 million people.

It was a triumphant post for a man who rose from sweeping London railway stations, through to being a policeman and trade unionist.

Once in power, though, he proved to be an authoritarian populist who inveigled against political foes, the media and sometimes even allies, earning him his snakey sobriquet.

His admirers saw him more as a no-nonsense man of action.

Sata had not been seen in public since returning from the UN General Assembly last month, where he failed to make a scheduled speech.

Even before Sata's death, analysts had said a power struggle for Zambia's top job was already well under way within the Patriotic Front.

They now face a divisive primary battle, before a possible general election challenge from former president Rupiah Banda, who is facing graft charges, has hinted at a possible return to active politics.

"I am legally eligible to stand," he told AFP early this month, citing calls from his supporters to return to the political fray.

Kenya's President Uhuru Kenyatta hailed him as an "outstanding son of Africa".

In London, the British flag over the parliament building was lowered to half-mast, a convention to mark the death of a Commonwealth leader.

Commonwealth Secretary General Kamalesh Sharma said he was struck by Sata's commitment to improving the lives of his countrymen.

South Africa's ruling ANC party said: "Zambia has lost not only a president who prioritised the poor, but also led the Zambian government at a time when the continent is working to reclaim its place in the global governance and economy."