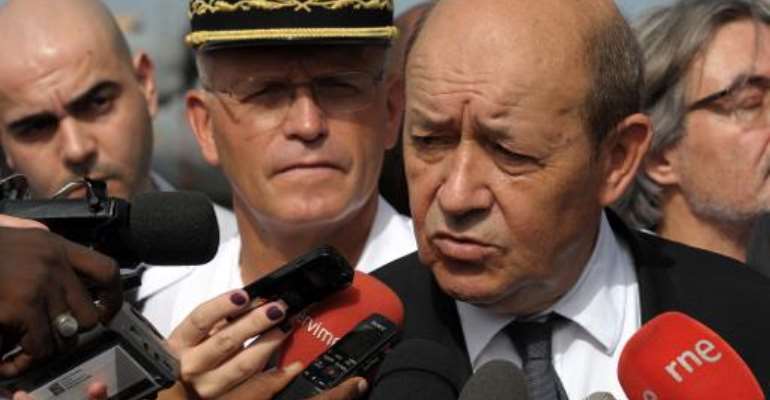 French Defense Minister Jean-Yves Le Drian speaks to the press during a visit to a French military airforce base in Dakar, October 24, 2014. By Seyllou (AFP/File)

Paris (AFP) - A French staff sergeant was killed in northern Mali early on Wednesday in an operation by French forces against "an armed terrorist group", President Francois Hollande's office said.

The killed soldier was a 32-year-old former Afghanistan veteran who belonged to Commando Parachute Group 10.

"Our troops approached a terrorist camp of around 30 individuals. Particularly violent clashes then took place that (Tuesday) night," Le Drian said in a statement.

Hollande "expresses his deep respect for the sacrifice" of the officer during "a particularly perilous mission", the Elysee Palace said in a statement.

Prime Minister Manuel Valls also expressed his "great sadness" over the soldier's death and praised the "professionalism, determination and courage" of the French troops stationed in Mali in their fight against extremists.

French troops intervened in Mali in January 2013 to chase out hardline Islamists, including Al-Qaeda in the Islamic Maghreb, which had seized control of the country's northern desert cities.

This intervention was replaced several months ago by a wider counter-terrorism operation, codenamed Barkhane, in five countries along the southern rim of the Sahara including Mali.

The operation is currently focusing on stemming a resurgence of jihadists in Mali and cutting their rear bases in Libya.

Drones, helicopters, fighter jets, armoured vehicles and transport planes are also part of Operation Barkhane -- the name of a crescent-shaped sand dune in the desert.