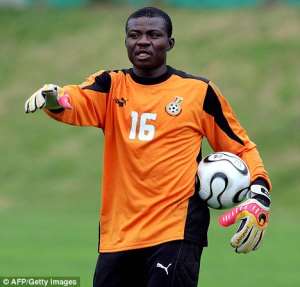 [caption id="attachment_271781" align="aligncenter" width="468"] George Owu[/caption] Veteran goalkeeper George Owu will go straight in coaching when he finally calls it quit on his playing career. The 2006 World Cup player is one of the experienced gloves men in the Ghana Premier League after representing Asante Kotoko and AshantiGold.He has featured in some international matches for Ghana but could not debut at any major competition.Owu, formerly of Egyptian side Al Masry, says he would love to pass on his experience to the younger generation once he hangs up his boots."I have been to a world cup and I believe I have acquired enough knowledge to be able to pass on to the younger once after I retire," the 32-year-old said."I don't know when I will retire but I still enjoy the game but after I retire I can say I would consider coaching."

Election 2020: Only Uniform Personnel Will Be Deployed – Gha...
10 minutes ago