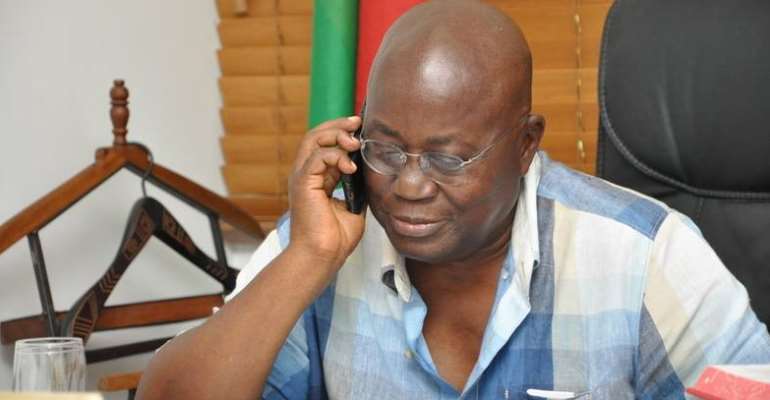 Flagbearer of the New Patriotic Party (NPP), Nana Addo Dankwa Akufo-Addo, is set to name his campaign team and who gets to lead the team as Campaign Manager in the coming days.

The decision, however, does not seem to be an easy one for him in view of the usual jostling and lobbying that often characterise such appointments.

So far, four names have popped up as those being considered for the position.

The list surprisingly includes the name of Dr Mahamudu Bawumia, 2008, 2012 and 2016 vice presidential candidate of the NPP; alongside Dan Kwaku Botwe, Member of Parliament for Okere in the Eastern Region and a two-time General Secretary of the NPP; Stephen Ntim, former National 1 st Vice Chairman of the NPP; and Edward Boateng, CEO of the Global Media Alliance.

DAILY GUIDE can however report that there is intense lobbying by interested parties within the corridors of power of the NPP to determine who manages the campaign of the party and its presidential candidate, going into the 2016 general elections.

After the naming of Dr Mahamudu Bawumia as running mate to Nana Akufo-Addo last Thursday, October 23, the next 'most important' position up for grabs in the party is that of Campaign Manager—the person who would be responsible for planning and organising a winning campaign and overseeing all aspects of NPP's campaign organisation.

Dr Bawumia
The emergence of Dr Bawumia's name as one of those being considered for the position of Campaign Manager has come as a big surprise to many party people, considering the fact that he happens to have been made running mate to the flagbearer, Nana Akufo-Addo.

However, the idea for him to oversee the 2016 campaign is being mooted strongly by persons who believe the renowned economist has proven his worth over the last six years, when he emerged from political obscurity to become a household name in Ghanaian politics, especially during the landmark election petition.

A source at the NPP headquarters at Asylum Down in Accra told DAILY GUIDE Dr Bawumia 'has all the attributes needed to manage Nana Akufo-Addo's campaign.'

According to the source, Dr Bawumia has proven beyond all reasonable doubt that he is organised, and pays attention to detail, as depicted in his sterling performance in the witness box during the election petition hearing at the Supreme Court.

Also, his in-depth analyses on the state of the Ghanaian economy, which have all been vindicated, have proved as an extra shot in the arm for those pushing the 'Bawumia for Campaign Manager' agenda.

Additionally, the paper can confirm that the 50-year-old Bawumia, a former Deputy Governor of the Bank of Ghana (BoG), has become the 'darling boy' of Nana Akufo-Addo, and indeed many supporters within the NPP.

The level of trust and confidence reposed in him by Nana Akufo-Addo is evident over the course of the 2012 general elections, and recently the internal presidential primary contests which resulted in Nana Akufo-Addo garnering 94.35% of the valid votes cast.

Nana Akufo-Addo, just as he did in 2012, handed over responsibility for campaigning in the three Northern Regions and the Volta Region to Dr Bawumia.

Dan Botwe
'The General', as he is popularly known, Dan Kwaku Botwe's clout as an election winner, stemming from his exploits in 2000 and 2004 elections when the NPP won political power, cannot be overshadowed in the bid by lobbyists to get him the top job of being the man in-charge of Nana Akufo-Addo's campaign.

'He excites the grassroots of our party and this is crucial in firing up members of our party to work tirelessly for victory,' a Dan Botwe lobbyist told the paper.

This will not be the first time Dan Botwe would be working as a member of Nana Akufo-Addo's campaign team, having snapped up the position of Director of Campaign Strategy going into the 2012 general elections, which the NPP lost.

However, his backers, most of whom are said to be Regional Chairmen of the party, believe 'nothing short of victory' will be delivered to the NPP should 'the General' be given charge of the NPP campaign going into the 2016 elections.

'He has proven that he knows how to win elections. The grassroots of the party know him and love him and believe he will focus the campaign at that level,' an aide of his told the paper.

Stephen Ntim
Having been the Middle Belt sector co-ordinator for Nana Akufo-Addo's campaign in the just-ended NPP flagbearership contest, which saw him deliver 97.96%, 93.33% and 93.25% margins of victory for Nana Akufo-Addo in the Eastern, Ashanti and Brong Ahafo Regions respectively, a very strong case is being made for Stephen Ntim to be handed the Campaign Manager position.

With political pundits stating that the NPP needs to overwhelmingly win the majority of votes from the Ashanti, Eastern and Brong Ahafo Regions to win the next election, his backers insist Ntim's track record speaks volumes.

They cite the fact that the NPP has a formidable team in the regions, with the 10 strong regional chairmen, who have shown signs of hunger and readiness for power.

'We do not need a strong, domineering personality at the top. Nana wants to run a decentralised campaign, the kind that delivered the 94% victory. Ntim is seen as easy to work with,' a party faithful who worked with Ntim on his recent campaign to be the NPP National Chairman told the paper.

Another plus for the former National 1 st Vice Chair of the party is that he has a very close relationship with Dr Mahamudu Bawumia.

He is also seen as having no presidential ambition and must be given the role to play.

In the last two presidential campaigns, Nana Akufo-Addo settled on people with presidential ambitions including Dr Kofi Konadu Apraku in 2008 and Boakye Agyarko in 2012 as heads of his campaign team.

Both men contested against him in the 2007 flagbearership primary of the party.

Some people are also subtly rooting for Agyarko to be made the Campaign Manager for the 2016 election.

Described as the 'systems man', Edward Boateng has been involved in campaigns of the NPP from as far back as the year 2000 and has sat on presidential campaign committees since the year 2004.

Mr Boateng, who is a media mogul, is seen as the man who can help to ensure that there is a seamless coordination among the various campaign structures.

'He may not be a grassroots man but has the managerial prowess and campaign experience to ensure that when strategies are agreed on, they are implemented,' according to one of his key staff members.

Dilemma
The choice of who gets to head his campaign team as Manager therefore seems an arduous task for Nana Akufo-Addo, considering the intense jostling and lobbying from not only key and influential members of the NPP but his close allies and associates.

Unlike his two previous flagbearership campaigns, for this year's emphatic victories in the two-staged presidential primaries, Nana Akufo-Addo did not name any Campaign Manager.

Instead, he ran the campaign himself, chairing a Campaign Coordinating Team which included his key strategists such as Dr Bawumia, Akosua Frema Opare, Victor Newman, Boakye Agyarko and Lord Commey.

It was this system, chaired by Nana Akufo-Addo, which delivered 81% victory on August 31 and 94% on October 18.