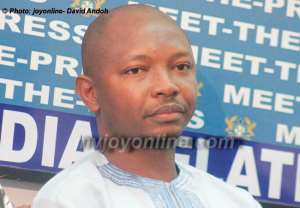 Acting National Coordinator of National Youth Authority (NYA) Ras Mubarak has described as "baseless, slanderous and laughable", allegations of corruption levelled against him by the Director of Finance, Aminu Abdulai.

Mr. Aminu claimed his office has been locked on the orders of Ras Mubarak because he refused to carry out the Coordinator's orders to misappropriate public funds of GHâ‚µ215,100.00 out of GHâ‚µ450,000.00 meant for the Youth Leadership & Skill Training Institutes (YLSTIs).

He said due to his refusal to carry out the orders, Ras Mubarak broke into his office in Accra and sealed the place with locks on Friday, October 17.

Narrating his ordeal, the Director of Finance said the Youth Coordinator has written to the Controller and Accountant General to "replace me to pave the way for him to execute his dia­bolic plan".

"He then forged documents to Bank of Ghana (BoG) to execute his diabolic plan and desperately used two category 'A' signatories instead of one category 'A' (which is his) and category 'B' (which is mine) but it was detected and stopped," he added.

Mr Abdulai claimed Ras Mubarak "collaborat­ed with one of my subordi­nates, took her sample sig­nature to Bank of Ghana so as to change my signature just to get a category 'B' signatory but Bank of Ghana referred him to con­troller," and that the youth coordinator took the signature to Controller & Accountant General but Controller detected it too and refused to process it.

But Mr. Mubarak, who is in Baku, Azerbaijan attending the first Global Youth Policy Forum, in a statement copied Myjoyonline.com said Mr. Aminu was sacked because of "indiscipline and various acts of misconduct".

My attention has been drawn to slanderous allegations levelled against my person by Mr. Aminu Abdulai, a member of staff of the Comptroller and Accountant General's Department.

I was not surprised when I got emails from Ghana about the publication as there were hints he intended dragging my name in the mud. I was only surprised it had taken him so long.

I wish to first, caution members of the media, that, I would institute legal action against the said gentleman and the newspaper that produced the vile allegations and defamation by this aggrieved public servant, who ought to have used official public service channels to address grievances if he felt hard-done-by, but instead went to the media in a very desperate attempt to drag my good name in the mud.

Let me assure the general public that (1) the allegation that I sacked him ostensibly to divert public funds are completely untrue and laughable to say the least.

(2). That I had fired him "for refusing to distribute a whooping GHC 450,000" to our youth institutes certainly is not true;

(3).That I personally broke into his office is baseless;

(4). To suggest that I had sacked him clearly shows his level of dishonesty. He is not a staff of the National Youth Authority. He is not on the payroll of the NYA. He is a staff of CAGD and it is only his employer who could relieve him of his work.

He was sent to the NYA by the Comptroller and Accountant General, following my written request for an officer to be seconded to us, as the Director of Finance at the NYA had gone on retirement.

In the few months that he'd been at the NYA, he had received not less than two queries for various acts of misconduct.

In the same period, he had woefully failed to meet critical deadlines, leading to some of our external partners writing to formally complain about our failure to meet deadlines of accounting work the officer was tasked to execute.

As someone who's result oriented, it had become very unacceptable and very embarrassing for me personally, and the institution I lead, that some of our partners would write complaining about deadlines we failed to meet.

(5). That I had taken GHC 50,000 of public funds to China is a Big Fat Lie, which I intend to have him proof in open court. As a matter of fact, the Enactus World Cup, which I attended in China was sponsored, from ticket through to accommodation to meals. These allegations are fabrications and nothing more.

(6). I have indeed written formally to the Comptroller and Accountant General, informing her about my decision to send him back due to his indiscipline and various acts of misconduct.

(7). Let me point out also that the accusation of forgery is the most bizarre of all his allegations. If we had sent him back to CAGD, it was only proper that I write formally to the Bank of Ghana notifying them that the said officer was no longer with the NYA, and that any cheque bearing his signature should be dishonoured.

(8). It is also proper, that a new signatory be introduced in order for work to function properly, and that is exactly what happened.

(9). The NYA has ten regional offices, almost one hundred district offices, nine youth leadership and skills training institutes and a national headquarters. All of these offices have to operate to enable us execute our mandate.

Now the Ministry of Youth and Sports, released an amount of GHC 450,000 Cedis to the authority as impress. As head of the Authority, I needed to prioritise and ensure that there's a fair allocation of resources.

I do not know the officer's understanding of misappropriation of resources, as he alleges and whether the words "accountable impress" mean anything to him. Absolutely no law had been broken, no funds have been misappropriated, nor shall be misappropriated and there's absolute clarity on the direction about the funds release.

I am currently unavailable until Monday 3rd November 2014; as I'm in Baku, Azerbaijan, attending the First Global Forum on Youth Policies, which is fully funded and convened by the Office of the UN Special Envoy on Youth, with partnership from UNDP, UNESCO, the Council of Europe and the Government of Azerbaijan.

Finally may I entreat members of the general public to treat with the contempt it deserves the allegations by the gentleman. I am very focused on the task given to me by H.E. the President of Ghana. I am also Unfazed and unshaken by such attacks, and no amount of slander, viciousness and one-sided journalism will distract me from focusing on the task of helping advance the cause of the youth of our great country Ghana. Be assured that public funds, disbursed to the National Youth Authority, for its work, under my leadership, are in safe hands.