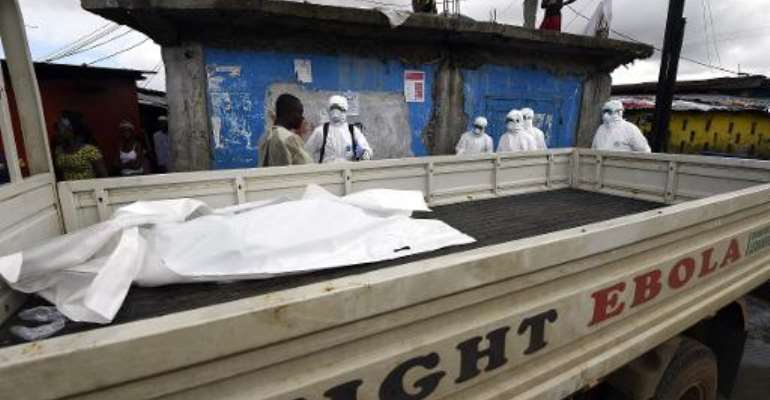 A body bag containing a person suspected of dying from the Ebola virus is collected and put on the back of a truck in Monrovia, on October 4, 2014. By Pascal Guyot (AFP/File)

Monrovia (AFP) - The Red Cross offered hope Tuesday of a turning point in the battle against the deadly west African Ebola outbreak, saying it had seen a dramatic drop in bodies collected in Liberia's capital.

The charity announced its workers were now picking up little over a third of the late September peak of more than 300 bodies a week in and around Monrovia -- an indication, it said, that the outbreak was retreating.

The announcement appears at odds with the assessment of UN chief Ban Ki-moon, who warned Tuesday at a crisis meeting in Ethiopia that the spread of the virus continued to outpace the response, while the head of the World Bank appealed for thousands more medics.

The Red Cross comments came a week after the World Health Organization (WHO) concluded in an update on the crisis that transmission "remains intense" in the capitals of Liberia and neighbouring Guinea and Sierra Leone.

Fayah Tamba, head of the Liberian Red Cross, said his workers collected 117 bodies last week from Montserrado county, which includes Monrovia, noting a steady decline from the high of 315 from September 15 to 21.

"I am sure you don't need a rocket scientist to tell you that the cases are dropping," he told private radio station Sky FM.

The Ebola outbreak has left almost 5,000 dead, nearly all in west Africa, leading to cancelled flights, border closures and a firestorm of criticism in the United States over its treatment of returning health workers.

Another country in west Africa, Mali, is scrambling to prevent a full-blown outbreak after a two-year-old girl died from an Ebola infection following a 1,000-kilometre (600-mile) bus ride from Guinea.

Liberia has been hit worst, with 4,665 recorded cases and 2,705 deaths, according to the WHO, relying on figures however which are now 10 days out-of-date.

Ban told reporters in Addis Ababa he was planning to visit Liberia and its stricken neighbours at an "opportune" time and urged the international community to send more medical teams to fight the epidemic.

"Transmission of the virus continues to outpace the response effort of the international community," he said after a meeting of the heads of the UN, African Union and the World Bank in the Ethiopian capital.

"Ebola is a major global crisis that demands a massive and immediate global response. No country or organisation can defeat Ebola alone. We all have a role to play."

Ban, who on Monday had criticised the enforced quarantine in the United States of an American nurse who had returned from Sierra Leone, said the only way to stop the epidemic was "at its source".

"The longer the epidemic rages, the greater the risk of spread to other countries. Mali is the latest example in this regard," he added.

World Bank chief Jim Yong Kim echoed the warning in an apparent swipe at developed countries which have not sent medical teams to the region, saying Ebola was "not an African crisis... it is a global crisis".

"We'll need a steady state of at least 5,000 health workers from outside the region... those health workers cannot work continuously -- there needs to be a rotation," he told reporters.

Kim said medics should remember their vocation and the Hippocratic oath and not shy away from going to a problem area.

"Right now, I'm very much worried about where we will find those health workers," he said.

Ebola can fell its victims within days, causing severe fever and muscle pain, weakness, vomiting and diarrhoea. In many cases it shuts down organs and causes unstoppable bleeding.

The tropical virus is spread though close contact with the sweat, vomit, blood or other bodily fluids of an infected person. No widely-available medicine or vaccine exists.

Samantha Power, the US ambassador to the UN, travelled from Sierra Leone to Liberia on Tuesday for the third leg of a tour of the three worst-hit nations aimed at garnering global support for the Ebola response.

Before leaving Freetown she praised the leadership of Sierra Leone President Ernest Bai Koroma and pledged "the support and solidarity of President Obama and the American people".

Koroma has ordered authorities across the country, where more than 1,200 people have died, to ensure that burials take place within 24 hours of death unless there is overwhelming evidence that the cause was not Ebola, state media said.