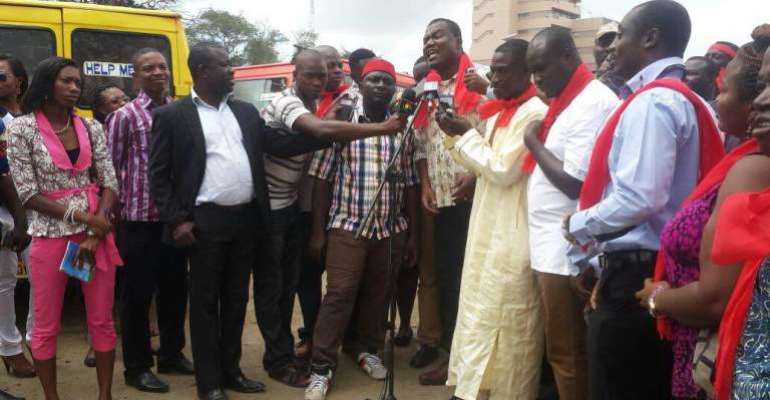 In the wake of Government's insensitivity towards the plight of Ghanaians, the Alliance for Accountable Governance (AFAG) and the good people of this country will on Thursday the 6th of November 2014, take to the streets to bare our teeth out against the enormous corruption perpetuated and supervised by the NDC government. This well organised and despicable crime against the good people of this country, has dwindled the economic fortunes of the state and virtually every household in the Ghana.

Corruption has become more of the norm than exception. No week passes without another act of corruption under the NDC regime exposed. AFAG is talking about the high indecision, and lack of principles of transparency and accountability under this John Mahama led NDC government.

This NDC government has left a huge stock of debt without value for money or capital investments. In spite of all that has been said in the past against the NDC on corruption, our "yentie obiaa" president has endorsed another well-organized act of corruption baffling imagination.

While Tetteh Quarshie interchange cost $32M, Sofo line interchange the most intricate in Ghana costing $38M, the N1 highway with six lanes and 2 interchanges spanning from Tetteh-Quarshie to Mallam cost $110M. However, that of Kasoa a much smaller one is to be constructed by a corrupt Brazilian company at $174M. This $174M loan was part of the loans pushed on parliament for approval during their emergency sitting 3 weeks ago. We understand this company is a baby of someone at the highest level of government and is untouchable. So we ask, who is behind this company?

This Brazilian company Queiroz Galvao Construcao is the same company that just constructed the controversial Umbraer jet ($25M turned $88M) hangar at Kotoka International Airport. This same company is constructing the circle interchange at an inflated cost of 78 million euros. Other competitive companies estimated this same project at 46 million euros.

What is more intriguing is the approval of $168M loan 3 weeks ago as extension works on the already inflated circle project. What kind of extension is worth more than the N1 highway from Tetteh-Quarshie to Mallam? This company used as a corruption vehicle has also been awarded with the Tamale airport project. Is the IMF aware of this well organized crime against Ghanaians? Are there no Ghanaian constructing companies? Why are the projects well over inflated? Because of economic mismanagement and greed we have had to run to IMF begging on our knees for funds and promising to adhere to their harsh conditionality.

Fellow countrymen, for those eyeing economic fortunes after 2016(having caused the mess), this suffering is far from over. Our intelligence from Washington around the corridors of the IMF shows that, government has been advised to introduce VAT on petrol and other petroleum products. Economic chaos ahead!!! Mr. President if this is so, AFAG can assure you of the greatest non co-operation of Ghanaians.

Fellow Ghanaians, our lives are in danger by these untruthful economic scavengers. There is merciless hardship visiting every household except for the NDC and their appointees. Worst off is the fear of workers going home as paupers. Pensions are in danger. How on earth can a retiree be on GHS 200 a month? Workers life is been toyed with, they cannot locate their deductions. This is painful. Certainly government is not getting it right. It is their money give it back to them Taking them to court without releasing their funds to them is shameful and pathetic.

Fellow Ghanaians, we need to rise up and stand for our right. The economic mess is debilitating. No consistent supply of electricity and water, yet we pay ever increasing tariffs on utilities. World market price of oil is on the decline yet we are paying high prices for petrol and its related products. They say the dollar is falling against the cedi yet import duties are so high that various trading companies are folding up and the price of items soaring. Cost of living is so high. The home we have is now a hell to live in. Mr. President, Ghanaians are maiming.. The economy is "hot and killing (Aagbe Wo)".

In this regard we call on all Ghanaians, young and old, employed and jobless, home and abroad, civil societies alike, public advocates, political parties and trade unions to join AFAG on Thursday the 6th of November, as we demonstrate to show to the world, the level of economic hardship, corruption has plunged Ghanaians into.

This AFAG demo is premised on corruption & economic hardship and title in GA language "Aagbe Wo". Come demonstrate to save Ghana on Thursday 6th of November starting from Obra spot and ending at hearts park.

We’re Investing Massively In Infrastructure; Not Rearing Fly...
8 minutes ago

Mahama Shakes Tarkwa As Menzgold Customers Give Him Rousing ...
8 minutes ago