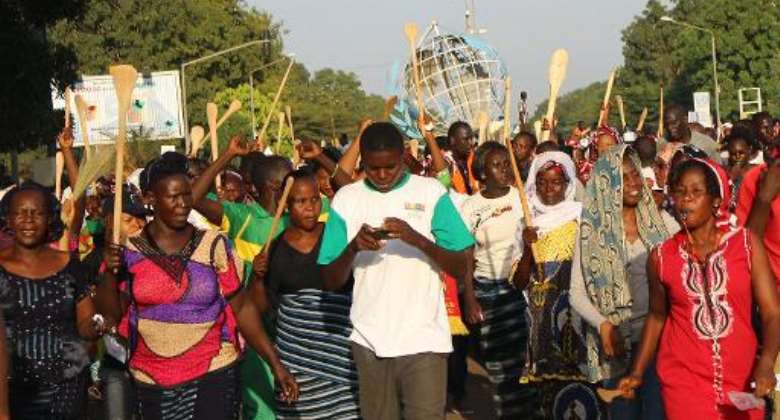 Ouagadougou (AFP) - Protesters battled police in the capital of Burkina Faso on Tuesday after a massive rally against plans to let the long-serving president extend his rule beyond 30 years.

Firing tear gas, security forces charged demonstrators after they apparently ventured too close to parliament. Most of the protesters fled but several hundred stayed on to battle the police, according to an AFP reporter at the scene.

The violence erupted at the end of a march in Ouagadougou that drew up to a million people, according to opposition leaders fighting to prevent what they see as a constitutional coup by supporters of President Blaise Compaore.

Schools and universities have closed for the week of protests planned in the impoverished west African nation against the move to prolong Campaore's 27-year-rule by allowing him to seek another term next year.

Pre-dawn violence had already broken out early Tuesday as gendarmes fired tear gas at dozens of youths barricading the country's main highway, who hurled stones in response, according to an AFP reporter.

Hundreds of thousands of people later set off from the capital's main Nation square, blowing whistles and vuvuzela trumpets, before the violence broke out.

Protesters carried banners reading "Blaise Get Out!" or "Don't Touch Article 37", in reference to the constitutional term limit that may be scrapped to let the president seek reelection.

"Our march is already a huge success, phenomenal," said opposition leader Zephirin Diabre. "Our struggle has entered its final phase. It's make or break time -- the nation or death!"

"This is our final warning for Blaise Compaore to withdraw today" the draft amendment to be brought before the National Assembly on Thursday.

The leader of Compaore's party in parliament, Assimi Kouanda, accused the protestors of attacking deputies and called on the president to "take every measure to guarantee security".

Compaore was only 36 when he seized power in an October 1987 coup in which his former friend and one of Africa's most loved leaders, Thomas Sankara, was ousted and assassinated.

He has remained in power since then, reelected president four times since 1991 -- to two seven-year and two five-year terms.

In 2005, constitutional limits were introduced and Compaore is therefore coming to the end of his second five-year term.

The opposition fears the new rules -- which are not expected to take previous terms into account -- would enable Compaore to seek reelection not just one, but three more times, paving the way for up to 15 more years in power.

The third largest party in parliament said at the weekend it would back the amendment, setting the ruling party on course to obtain the two-thirds majority it needs to make the change without resorting to a referendum as first promised.

Opposition leaders have called on the public to blockade parliament to prevent the review from taking place.

Protesters have erected barricades and burned tyres in the capital since the proposal was announced on October 21, with hundreds of women demonstrating with spatulas in their hands and secondary school children deserting classes to join the protests, creating major disruptions.

Civil society groups have also asked for the project to be dropped, saying the country risks being paralysed if the amendment goes through.

Compaore's bid to cling on to power has angered the opposition and much of the public, including many young people in a country where 60 percent of the population is under 25.

Many have spent their entire lives under the leadership of one man and -- with the former French colony stagnating at 183rd out of 186 countries on the UN human development index -- many have had enough.