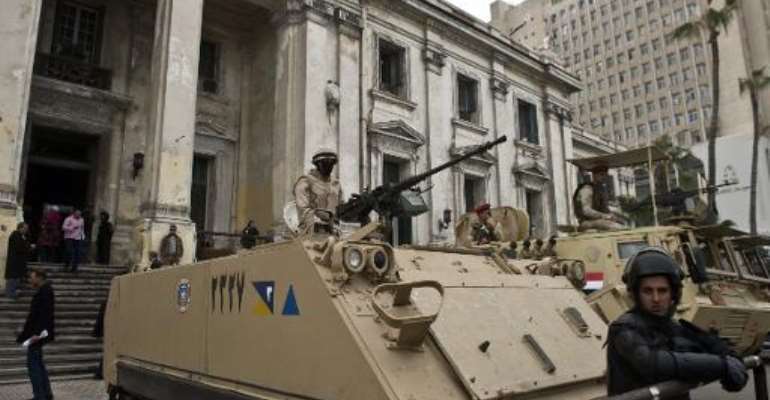 Egyptian soldiers and police stand guard with armoured personnel carriers (APC) outside the criminal court in the Mediterranean city of Alexandria on March 3, 2014. By Khaled Desouki (AFP/File)

The decree came after Sisi promised a tough response to what he called an "existential threat" to Egypt posed by militants, following an attack Friday on an army checkpoint in the Sinai that killed at least 30 soldiers.

It places state infrastructure including electricity towers, major thoroughfares and bridges under military protection for two years, allowing the army to try anyone suspected of attacking the public facilities.

"Crimes against public institutions, facilities and properties fall under the jurisdiction of the military judiciary," the decree states.

Egypt has witnessed a surge in militant attacks since the army, then led by Sisi, ousted Islamist president Mohamed Morsi from power in July 2013.

Morsi's ouster also unleashed a deadly police crackdown on his supporters that has left hundreds dead and thousands in jail.

The government has cracked down on protests after Morsi's overthrow, passing a law that banned all but police-sanctioned demonstrations.

The military was already empowered with trying civilians for attacks on the army, but Sisi's decree considerably expands its powers by defining state infrastructure as "military facilities."

Sisi's spokesman, Alaa Youssef, told AFP the decree was not meant to target protests but would deal only with "terrorism".

"There is a big difference between attacking public installations and protesting," he said. "They are two different things."

The law, he said, was aimed at "protecting public installations and utilities from terrorist attacks."

An end to civilians appearing before military tribunals was a core demand of the revolutionaries who spearheaded a 2011 uprising that overthrew veteran strongman Hosni Mubarak.

Following Mubarak's ouster, thousands of people accused of a range of crimes were tried before military courts during an army-led transition before Morsi's election in mid-2012.