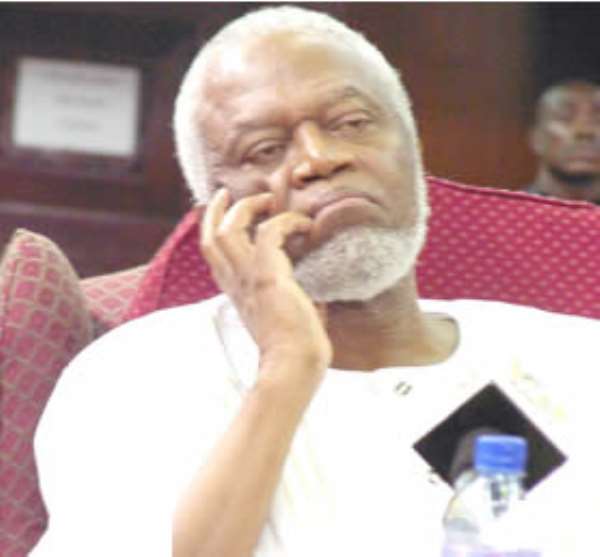 FORMER National Security Chief, Captain Kojo Tsikata (Rtd), has launched a blistering attack on the National Reconciliation Commission (NRC), accusing it of planning to ambush him with lying witnesses like, Chris Asher, Mathew Adabuga and Oduro. "The new tactic, therefore, is to ambush me with lying witnesses who claim to be able to debunk parts of my own testimony and, by extension, discredit the whole of it. This is calculated to have two effects". He said in a press statement issued in Accra yesterday that first, it provided the NRC with a basis, however flimsy, to refuse to acknowledge his innocence in its final report. "Secondly, and more importantly, given the electoral context which has coloured the management of the reconciliation process from day one, it provides material that the orchestrators of this campaign within the security apparatus and the private editors that they control can use to extend their shameless propaganda against the regime's enemies." Capt Tsikata said in his evidence-in-chief last February, he revealed the dangers of allowing the reconciliation process to be polluted by partisan electoral considerations. He said the efforts made to establish the truth about human rights abuses and to achieve reconciliation were far too important for such treatment. "I am issuing this statement to alert the public to the latest phase in the orchestrated effort to use the NRC as a platform for political witch hunting," said the former security capo. Over the last 18months, he said, thousands of people had laid bare their deepest physical and psychological wounds in the hope of achieving some healing and peace. These people, according to him, deserved much more from the NRC than the "vicious rumour mongering of the likes of Chris Asher and George Tagoe. They deserve better than media sensationalism and exploitation. The political witch-hunt that the NRC has become is a grievous insult to all Ghanaians who want, above anything else, to come to terms with our past and move forward." Capt Tsikata, who claimed to be suffering from accusations of masterminding the murder of the judges and the retired army officer for over 20 years until he spoke at the NRC in his maiden appearance, said he would continue to defend his innocence and expose the campaign, which undermined a genuine reconciliation process. Advancing his argument further, he said, "In my February testimony before the NRC, I spoke of the widespread perception that certain forces had mounted a campaign to subvert the reconciliation process to serve a partisan political agenda. I pointed out that the NRC's creation of a platform for malicious gossip and third party hearsay for Chris Asher, facilitated this agenda." He said his assertion that certain forces were bent on subverting the reconciliation process to serve a partisan political agenda was confirmed by the involvement of officials of the national security coordinator's office in managing the appearances and disappearances of witnesses, the timing and content of their testimony and in managing the media coverage of the commission's hearings.

"The illegal 'hospitality' provided by the National Security Coordinator's office to Chris Asher in March and April and the fact that Matthew Adabuga's communications with the Commission are controlled exclusively by the operatives of the National Security are ample evidence," claimed the ex-Security capo, whose reign spanned the PNDC and NDC eras.

"With their refusal to face cross-examination," he further charged, "the last shreds of credibility conferred on Christ Asher, Adabuga and Oduro by the NRC snapped, exposing the extent of political manipulation of the NRC process that has taken place."

Denying, his involvement or evidence connecting him to the planning or execution of the June 30, 1982 murders of the judges and the ex-army officer, Capt Tsikata touched on the new witnesses that submitted reports that contradicted his earlier testimony.

"The commission has also received statements from new witnesses who claim respectively that I arrived in Ghana on December 31, 1981 and January 5, 1982. Copies of these witnesses' written statements to the NRC have been circulating within sections of the media since Friday, June 18. The NRC is yet to serve me or my lawyers with copies of these documents."

Evaluating the claims of the witnesses, Capt Tsikata said the claims were contradictory. "Both statements claim to be responding to reports that I told the NRC that I was not in Ghana the whole of January 1982. That was not the evidence I gave. And yet rather than drawing attention to this basic error, the NRC chooses to circulate these statements. The truth is that both claims are false," he charged.

Touching on Sqr. Ldr. George Tagoe (Rtd.) Capt Tsikata dismissed the allegations, saying, "Tagoe's claim that I personally took L/Cpl Samuel Amedeka twice out of prison custody at Nsawam in broad daylight-once to treat him to lunch and once in connection with his wife's delivery of a baby, is a preposterous lie."

"Amedeka was arrested on my instructions for subversion. The coup plotters had my elimination as one of their stated aims. Further, no prison administration would simply allow anyone-even a head of national security to stroll in and out of prison gates with prisoners as if it were a secondary school."

He reiterated that Tagoe's allegations against him were baseless and fabricated, meant to slander him, adding that the commission's preference to give him "(Tagoe) a second chance to slander me publicly and baselessly speaks volumes about their own attitude to their task."