Hibernian use Prince Buaben Facebook jibe as motivation in Scotland 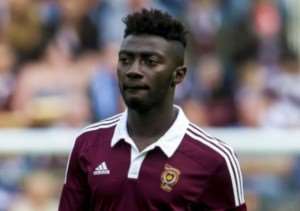 THE Hibernian squad are using a Facebook post by Hearts midfielder Prince Buaben in a bid to psych themselves up for today's Edinburgh derby, Danny Handling revealed yesterday.

A week after Hibs manager Alan Stubbs said the club had to adopt a siege mentality, the players have taken him at his word, interpreting Buaben's remark as a slur and appearing intent on proving him wrong.

The contentious sentence was written two weeks ago, when Hearts won at Alloa thanks to a late goal, while Hibs were being held to a goalless draw by Dumbarton.

“Happy with the win even doh [sic] we didn't play the way we can,” Buaben wrote. “But we got three points and that's the difference between us and the other chaser #myteamstrong. Enjoy your weekend #jambos.”

Handling said he thought it had been captain Liam Craig who ensured the quote was displayed at Hibs' training ground for all to see. “We saw a comment from Prince Buaben on his Facebook – he said he's getting bored of these 'chasers' or something like that, so it would be nice to shut him up,” Handling said.

“He was having a wee joke with the fans, but sometimes you get annoyed with what people say. I think the skipper put it up on a sheet at the training ground so all the lads have seen it.

“We want to prove him wrong, because he's having a dig at Hibs and we don't appreciate that. You get on with life, but we're striving to beat Hearts and put him right.

“It's obviously joking and banter between the two clubs, and that's fine, because there's no hatred between the players. There are a lot of friends between the teams – I'm good pals with Sam Nicholson – so it's not about hating each other.

“It's banter between the two sets of players, but it does make you want to beat them even more. We don't mind having the jokes and stuff, but when we get on the pitch it will be deadly serious.”

While Hibs have been criticised for lacking the spirit shown by Hearts in the derby, Handling insisted this was not the case, and argued there had often been very little between the teams in recent games. “I wouldn't say we lack the spirit Hearts have. If you see us in the changing room before the game we're just as up for it as they are.

“There is a lot of passion, there are a lot of tackles, but there's a lot of good football as well. It's not just about Hibs v Hearts and a lot of hatred, there's more to it than that. It's about the football on the pitch and the three points.

“Of course it's a massive game. There will be challenges flying in and the fans will be up for it. There might be a few verbals, especially if a tackle goes in or there's a bad decision, but nothing out of the ordinary comes of it. So, although you could class it as a war, it's still about football.

“We've been looking forward to this game. Not much has to be said about it and you don't have to be motivated for it. Nobody has to take you and tell you what it means: in your own mind you're up for it.

“Even in the last game at Tynecastle I thought we were the better team. We missed a penalty and got beaten. So nobody can say we weren't up for the game. We've just not had any luck on the pitch”.