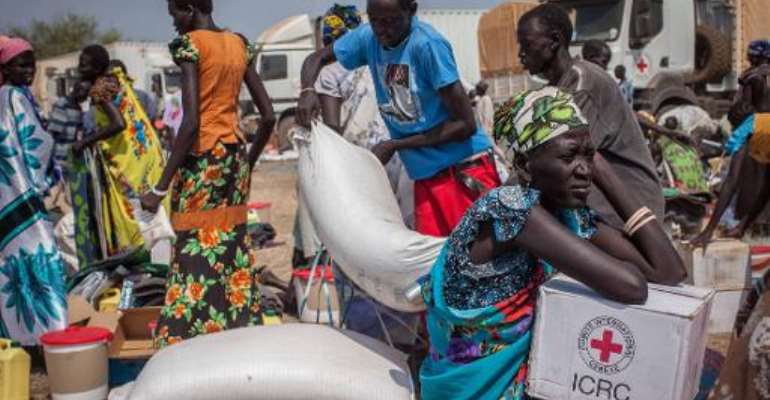 People receive food aid and other vital supplies on January 8, 2014 from the International Committee of the Red Cross, in Minkaman, South Sudan. By Nichole Sobecki (AFP/File)

Juba (AFP) - International charities working to stem chronic disease and hunger in war-torn South Sudan are facing increased harassment, surveillance and threats of expulsion from the government, according to a charity Friday.

A letter to over 100 international aid agencies from South Sudan's NGO Forum detailed the "increasing trend of harassment and interference targeting NGOs" that is "marked by increased hostility and threats from officials".

Incidents include the detention and expulsion this month of one foreign worker as "escalating rhetoric and the overall hostile tone toward [the] international community" rises, the letter said.

It also detailed concerns over the alleged "increased surveillance of NGO communications".

Last month South Sudan's Ministry of Labour ordered all international aid workers out of the country before another ministry rescinded it.

South Sudan, one of the world's poorest countries, became independent in 2011 after decades of battling hardliners in neighbouring Sudan, which also had a long history of cracking down on aid groups.

Now 10 months into its own civil war, the world's newest country is blighted by what UN officials call "a man-made crisis" that has caused widespread hunger, left 1.4 million people homeless and a third of the population needing help.

But the NGO Forum said government officials "have adopted a hostile and almost irrational approach toward NGOs" that includes trying to ban the use of the words famine, disaster and catastrophe.

The UN's World Food Programme is still trying to trace South Sudanese staffer Mark Diang, who was abducted at gunpoint last week by plain clothes men from an airport in the north of the country.

In a meeting with officials this week, international representatives were "threatened and intimidated personally and organisationally", leaving them "increasingly vulnerable", the letter said.

British charity Oxfam, which authored a report predicting famine in parts of the country, was reportedly "directly in the line of fire" at the meeting, but the government also "threatened" the 36 charities that signed the report and demanded an official apology and retraction.

A spokesman for the South Sudan government could not be reached for comment.