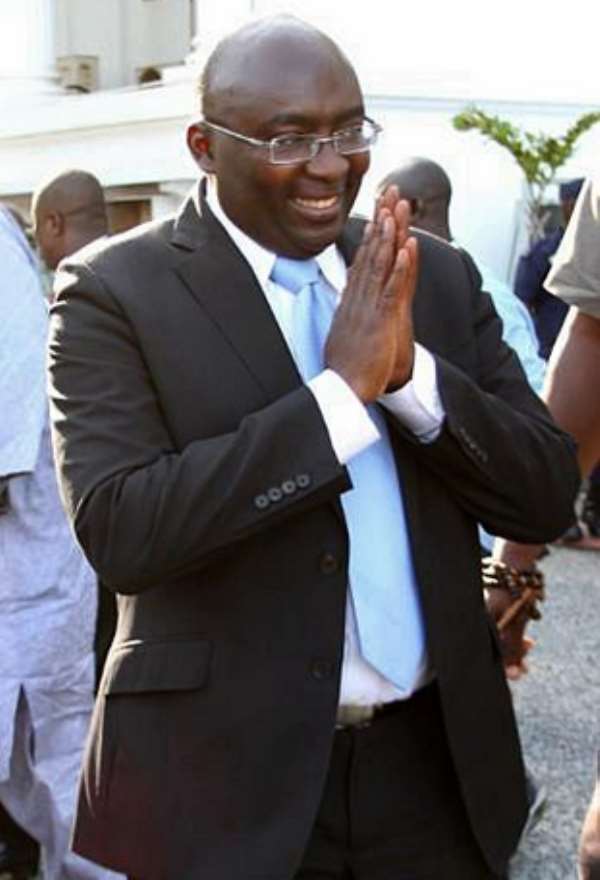 Dr. Bawumia, a former Deputy Governor of the Bank of Ghana was the running-mate of Nana Addo who received an overwhelming endorsement from party delegates at last week's congress, in both the 2008 and 2012 general elections which they lost.

Even before today's formal presentation to the party's National Council, Nana Akufo-Addo consistently maintained that if he won the flagbearership contest, he would retain the Walewale native, reputed as an excellent economist, as his running-mate in the 2016 elections when chosen as the party's flag bearer.

“Definitely. You can't even call it an open secret, it's absolutely my intention. I've said so publicly already that were I to be privileged once again with the honour of leading this party, that I want to have Dr. Bawumia by my side,” he said on Metro TV's Good Evening Ghana programme last Thursday.

Consistent with this pledge, he submitted the name of Dr. Bawumia to the National Council at its meeting which had in attendance former President John Agyekum Kufuor, defeated aspirant hopeful Alan Kyeremanteng, the National Executives of the party, and a host of other bigwigs of the largest opposition party.

Party sources told Live News, that today's presentation of Dr Bawumia was readily accepted, unlike in 2008 when his selection was vehemently opposed.

Several leading members of the party including firebrand Kennedy Agyapong said they would not campaign for the party which was seeking to retain government after former President Kufuor's eight-year rule, if Dr. Bawumia was selected.

However Nana Addo stood his grounds and settled on the renowned economist who has proven his worth and won the admiration of even those who opposed his selection then.

Addressing a news conference to officially inform party supporters of his running mate choice, Nana Addo said Dr Bawumia's economic credentials will help him reverse the decline of the economy when they are voted into power come 2016.

“The economy was always going to be the main battleground for the 2016 elections but the dire situation the country has been plunged into by the incompetence of the John Dramani Mahama administration makes the presence of Dr Bawumia on the NPP presidential ticket even more appropriate.

Luckily there is real chemistry between the two of us as well and I look forward to us leading the team that will ensure an NPP victory in 2016. I am confident that he will make an outstanding Vice President of the Republic and good manager of the economy who will help me reverse the decline of the economy,” he said to rapturous response from party faithful who thronged the party's Asylum down Headquarters.

He also touted Dr Bawumia's economic credentials and said he counted himself lucky to pair with the Economist.

“I have been very lucky to have Mahamudu by my side since 2008. His credentials as top notch economist were always known to all and have been reinforced by his analytical work and performance in this sector in the past five years earning him the sobriquet of Dr Prophet. It has been a joy to see him blossom as a consummate politician as well and win the affection of Ghanaians, and we all know how the nation took to his performance in the witness box in the Supreme Court during the historic election petition. Dr. Pink sheet is yet another of his names,” he elicited.

Nana Addo also touched on the renewed commitment and sense of party unite that has been awakened after the October 18th polls.

“I am happy to inform you that the process of co-operation after competition, which Alan Kyerematen aptly described on Saturday night at Efua Sutherland Children's Park as being at the heart of the NPP tradition, is in full swing. I had, as you know, after the first round of 31st August, received the support and co-operation of Hon. Joe Ghartey and Hon. Kofi Osei-Ameyaw, who made the shortlist of five but decided to drop out of the race to support me instead...... I have received with thanks and appreciation visits to my home from Hon. Francis Addai-Nimo and his wife, and my man, Alan Kyerematen, both of them renewing their pledges of support and co-operation. Today, Dr. Kofi Konadu Apraku and Hon. Stephen Asamoah Boateng also came to visit me for the same purpose. We are all fully committed to the success of the NPP project for 2016,” he said beaming with smiles.

The formal campaign team and its structure will also be outdoored in due course after the necessary consultations have been concluded.

Meanwhile, Nana Akufo-Addo and Dr. Bawumia together with the leadership of the Party will attend the afternoon prayers at the Central Mosque to pray with the Chief Imam for God's blessings on Friday, October 24.

The NPP is expected to hold an interdenominational service at the National Theatre on November 4, to seek God's blessings on the Party and to thank Him for the peace and success of the primary.