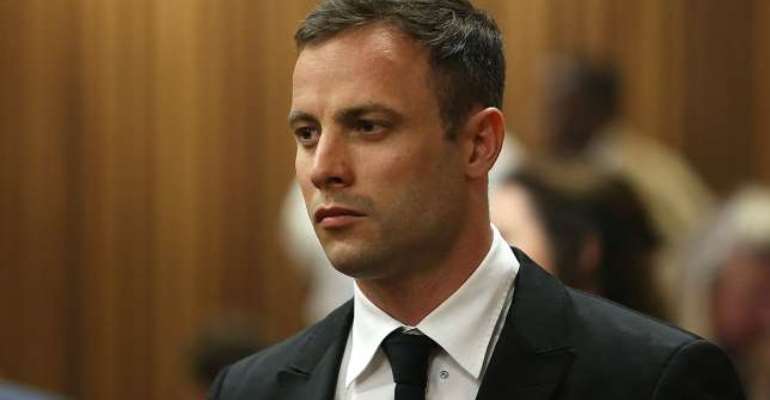 The Paralympic champion shot and killed his then-girlfriend Ms Steenkamp in his Pretoria home in the early hours of February 14, 2013 and was subsequently charged with her "wilful and intentional murder".

After pleading not guilty to the charge in March 2013, a lengthy court process found Pistorius guilty of a lesser charge of culpable homicide in September this year, before Judge Thokozile Masipa sentenced the South African to a maximum sentence of five years in prison.

Here we look back at the key dates in proceedings over the past 20 months.

February 14, 2013 - Pistorius shoots and kills Ms Steenkamp in his home in Pretoria and is arrested.

March 3, 2014 - Pistorius pleads not guilty to the charge of wilful and intentional murder, as well as other firearms offences.

March 6, 2014 - Pistorius breaks down in court as the death of Ms Steenkamp is described. Four days later, Pistorius is physically sick as the nature of Ms Steenkamp's injuries are described, and vomits in court again on March 13 when images of the deceased are shown.

April 7, 2014 - Pistorius takes to the stand as the defence opens its case. He apologises to the family of Ms Steenkamp. "I can't imagine the pain and the sorrow and the emptiness that I've caused you and your family."

April 15, 2014 - The cross-examination of Pistorius by the prosecution concludes and Pistorius steps down from the stand.

May 20, 2014 - It is announced that Pistorius will spend 30 days as an outpatient at Weskoppies Psychiatric Hospital from May 26.

June 30, 2014 - Pistorius is declared fit for trial after a report concluded that he did not have a mental disorder at the time of the shooting and was "capable of appreciating the wrongfulness of his act".

July 15, 2014 - Pistorius is involved in a nightclub fracas after being "aggressively engaged" about his trial.

October 13, 2014 - The sentencing begins, with the defence suggesting community sentence as an appropriate punishment.

October 21, 2014 - Judge Masipa sentences Pistorius to a maximum of five years in prison. For the firearms charge, he is sentenced to three years suspended for five, to be served concurrently.