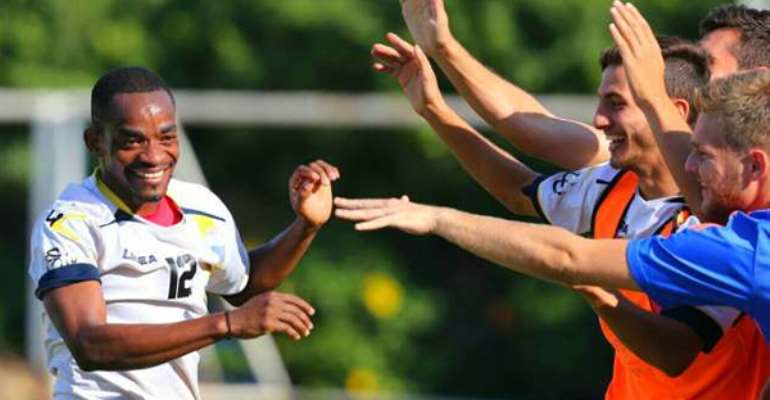 Michael Helegbe is the toast of fans in Lebanon following the Ghanaian forward's spectacular start to life at new club, Tripoli FC.

Playmaker Helegbe showed off his goal scoring prowess for AC Tripoli by banging in four goals to inspire them to a 5-2 win at Al-Nabi Shayth on match day two of the 2014/15 Lebanon Premier League season.

Helegbe jumped atop the top scorer standings with the four goals, a position he still holds despite not scoring in Sunday's match day 3 loss at Al Nejmeh, his nearest challenger boasting only two goals thus far.

This has inspired the Ghanaian playmaker to harbour dreams of winning a surprise top scorer gong come end of season in Lebanon.

"Yes I have my eyes on the goal king, it will be very nice to win such a top prize and I will work hard towards achieving that dream. I don't have any goal target since we've just started the season but I will score as much as I can," Helegbe told AllSports.com.gh exclusively from Lebanon.

Helegbe's side have only taken three points from the first available nine but the former Black Meteors captain is hopeful Tripoli can bounce back especially with more home games to come.

"Yes it's been a tough start but all the three games were away matches and I hope we are going to work on our mistakes and win a couple of games to put us in a better position in the league. We won't stop working hard," Helegbe said.

Helegbe joined Tripoli before the commencement of this season after playing for Medeama SC in the Ghana Premier League last term, having previously helped Asante Kotoko win the Ghana league title in his only season with the Ghana record league champions.

The former Liberty Professionals dribbling wizard is playing for Tripoli alongside compatriots, Douglas Nkrumah of Kotoko and Hearts fame as well as young defender, Emmanuel Teyehungmeh Of Berekum Chelsea but who last played for Amidaus Professionals in the Ghana Premier League.