Pistorius to learn if he must return to jail for murder 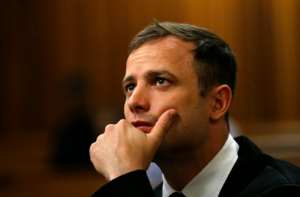 Bloemfontein (South Africa) (AFP) - Oscar Pistorius will learn on Thursday if he will be sent back to jail, when South Africa's Supreme Court of Appeal announces its verdict on a bid by prosecutors to have him convicted of murder for killing his girlfriend.

The star Paralympic sprinter was found guilty last year of the lesser crime of culpable homicide -- the equivalent of manslaughter -- for shooting dead Reeva Steenkamp in the early hours of Valentine's Day, 2013.

Pistorius, who said he mistook Steenkamp for an intruder when he opened fire with his pistol, was released from prison on parole in October after serving one year of his five-year sentence.

"There is a real prospect that the court might set aside the culpable homicide conviction and replace it with murder," criminal lawyer Rudi Krause told AFP.

"In that case, the appeal court will then send the matter back to the trial court for sentencing."

One of the five appeal judges is due to read out the verdict at 9:45 am (0745 GMT) at the court in Bloemfontein, South Africa's judicial capital.

At the crux of the case was how trial judge Thokozile Masipa interpreted the principle of "dolus eventualis" -- awareness of the likely outcome of an action -- under which she acquitted Pistorius of murder.

During a one-day hearing at the appeal court in November, state prosecutor Gerrie Nel argued that Pistorius intended to kill whoever was behind the locked toilet door through which he fired four bullets.

Pistorius, who will not be present in court, was released on October 19 to spend the remainder of his sentence under house arrest at his uncle's mansion in the capital Pretoria.

His trial attracted worldwide attention as he denied killing Steenkamp in a rage after the couple had gone to bed at his house in Pretoria.

"I was overcome with fear," he said while in the dock, describing how he thought he heard an intruder in the bathroom.

He grabbed his gun, and rushed without his prostheses to the bathroom.

"Before I knew it, I'd fired four shots at the door," he said, adding that he ran back to the bed only to find that Steenkamp was not there.

Pistorius killed the 29-year-old model and law graduate at the peak of his fame, following his historic performance in London in 2012 when he became the first double-amputee to race at Olympic level.

Last month he made his first appearance in public since leaving jail when he reported for community service at a police station in Pretoria.

A Pistorius family spokesman said no statement would be released after the verdict on Thursday.

Steenkamp's mother June is likely to be in court, said her lawyer.

His parole conditions have not been made public, but are reported to require him to meet with Steenkamp's parents if they wish.

If Pistorius, 29, is found guilty of murder, he would face a minimum of 15 years in prison.

He may also make his own appeal to South Africa's Constitutional Court -- the country's highest court.

In the aftermath of the killing, the Paralympic gold medallist lost his glittering sports career, lucrative contracts and status as a global role model for the disabled.