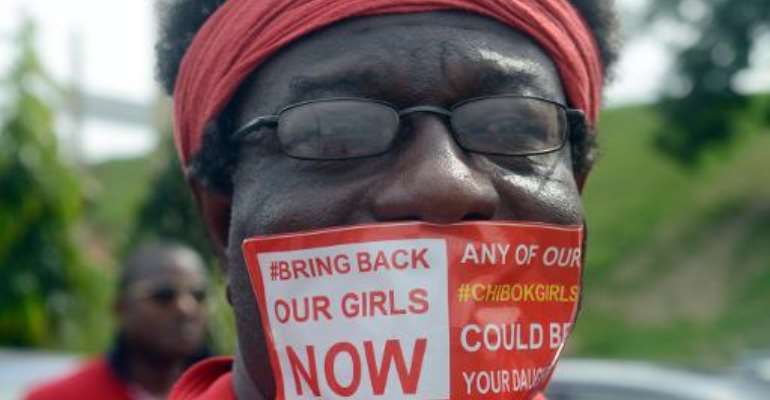 A man with a sticker reading "Bring Back Our Girls Now" campaigns for the release of the kidnapped Chibok schoolgirls during a rally in the Nigerian capital Abuja on October 14, 2014. By Pius Utomi Ekpei (AFP/File)

Washington (AFP) - A US official on Monday confirmed that a ceasefire deal appeared to have been reached between Nigeria and Boko Haram militants, but said talks to release some 200 kidnapped girls were ongoing.

Doubts have been raised since members of the Nigerian government said on Friday that they had secured a deal with Boko Haram to free the girls captured in April and to end hostilities.

In the aftermath of Friday's declaration by Nigeria's military and presidency, however, reports of attacks continue to emerge, casting further doubts on the credibility of the ceasefire claim.

And a group of Nigerian elders has said only one faction of Boko Haram had been involved in the deal.

"We can confirm reports that a ceasefire has been announced, (and) appears to have been put into place," State Department deputy spokeswoman Marie Harf said.

"This is a region that has had far too little of that."

But she said it was Washington's "understanding that the negotiations about a deal to release the girls continue."

With 80 US military personnel sent to neighboring Chad for intelligence, surveillance and reconnaissance, the United States is the biggest foreign participant in the effort against the Islamic militants, Boko Haram, who have terrorized parts of northern Nigeria.

Let's Avoid Second Wave Of COVID-19 By Following All Protoco...
14 minutes ago