Richard Anane Must Be Probed (0) 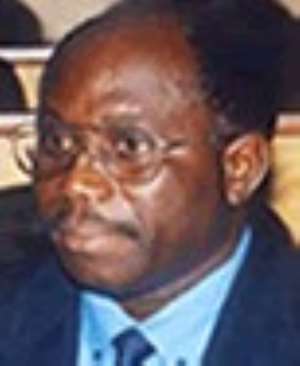 Recent reports about the extramarital sexual escapade between Dr Richard Anane, the current Minister of Roads and Miss Obrien, an African American lady continue to disturb many decent minded Ghanaians. Reports that the Minister has fathered a child out of wedlock is however not the primary concern of the Lens. The disclosure by Miss Obrien that the minister, during the thick of the affair, transferred into her account an amount of money of about $100,000 however in our opinion must be taken with utmost seriousness. For God's sake, we are talking about the cedi equivalent of approximately ¢930 million, nearly one billion cedis. This staggering amount that can transform the condition of so many people in Ghana is what Dr Anane whose known income does not exceed ¢7 million at the most, is supposed to have spent on one of his girlfriends. Two weeks have passed since Miss O'brien made this disclosure on Radio Gold. She dared Dr Anane to deny and she will go ahead to produce her bank statement to corroborate her affirmation. Dr Anane, a minister in the Zero Tolerance government of Kufuor has remained mum throughout this period.
Miss Obrien mentioned that top members of the government and the NPP party are privy to all the base details of the scandalous affair including the President, Mr J.A. Kufuor who himself is alleged to be in a similar quagmire. Mr Kufuor and his government of Zero Tolerance have conveniently adopted a no-hear, no-see stance and like the ostrich, they presume the news will just blow over and no one will remember very soon.
Too bad! That will not just happen. In the interest of transparency, accountability and good governance, we wish to urge the President to institute a full-fledged investigation to ascertain the truth or otherwise of the reports. An independent Commission of enquiry must be set up to find out the truth of the huge sum of money the minister is alleged to have transferred over a period into the account of Miss O'brien.
The practice of calling the government officials quietly to reprimand them when they are found to indulge in anything untoward will not be countenanced this time around. And if the President thinks the people of Ghana, who have had to bite the HIPC bullet all these three and a half years of negative change will sit by idly, while this criminal dissipation of public funds continues, then he should think again.
The president has always insisted that when he gets credible information about the malfeasance among his team members he will act with dispatch. Here you are Mr President! The golden opportunity is here. You can readily get all the facts you need to be able to act with zeal and alacrity the same way you would have done if this report were about a member of the previous government.
Ghanaians are watching with bated breath to see what Mr Kufuor will do about this most disturbing report. Would he as usual pretend that nothing has happened or would he for once walk his talk of zero tolerance by doing something about the scandalous report concerning the minister of Roads, Dr Richard Anane.
Over to you, Mr President! HIPC Ghana is watching, the international community is watching and all decent minded people all over the world wait anxiously to see what you will do.