NPP Short Test; Who Stands For What 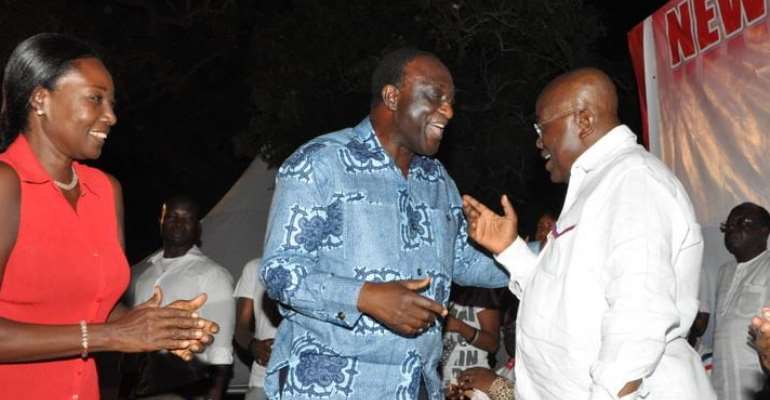 Do the fill ins. Who stands for what?

He graduated from the University of Ghana in 1967 with a B.Sc in Economics. Nana trained as a lawyer in England and was called to the English Bar (Middle Temple) in 1971 and the Ghanaian Bar in 1975.

At age 33, Nana became the General Secretary of the broad-based People's Movement for Freedom and Justice (PMFJ).

This group led the "NO" campaign in the UNIGOV referendum of 1978 and ultimately bringing the downfall of the Acheampong military government on 5th July, 1978.

In 1992, he became the first national organizer of the NPP and, later that year, campaign manager.

In 1995, Nana led the famous “Kume Preko” demonstrations of the Alliance for Change (AFC) which is touted as the most attended demonstration in the country.

Akufo-Addo was elected three times between 1996 and 2004 as Member of Parliament for the Abuakwa South constituency.

Under President Kufuor, Nana served as the Attorney-General and Minister for Foreign Affairs.

In his rounding off rally, he urged on unity for 2016 and promised to wrestle power from the ruling NDC if given the nod.

He holds a Bachelor's degree in Economics from the University of Ghana.

He is a Hubert Humphrey Fellow of the School of Management at the University of Minnesota.

Alan Kyeremanteng has had a successful career serving in international bodies including the World Trade Organization; the trade wings of the United Nations and the ACP countries.

Mr. Alan Kyerematen has been a leading young stalwart and key strategist of the NPP since its inception in 1992.

Kyeremateng was the Ghanaian Ambassador to the U.S.A and later Minister of Trade and Industry and eventually appointed as head of the Presidential Special Initiatives under President Kufuor led government.

Alan only became visible as a politician when he made an attempt at the leadership of the New Patriotic Party in 2007.

He was first runner-up to Nana Akufo-Addo who gained 47.96% of votes cast.

Mr. Kyeremateng made a second attempt at the Party's leadership in 2010 and placed second again to Nana Akufo-Addo.

His last words to end his campaign tour have been his appeal to floating voters:

He has also been promising free vehicles and motor bikes, monthly stipends and campaign offices for delegates.

He is currently MP for the Mampong constituency.
He can boast of a vast experience in civil engineering with a BSc in Civil Engineering from the Kwame Nkrumah University of Science and Technology

He also holds a Masters in Public Administration from GIMPA.

He has served in government on several committees including committee on Poverty Reduction Strategy.

His campaign has been harped on unity for victory in 2016. Unlike his two contenders who have remained visible on huge campaign platforms, Addae Nimo has been working behind the scenes.

His potential of pulling surprises however cannot be wished away. Former general secretary of the NPP Lawyer Owusu Afrieyie (popularly known as sir john) hinted on a political platform that the Nana Addo camp fears the force of the lone underground worker than the visible Allan Kojo Kyeremanteng.

However, the battle lines are drawn. Saturday OCTOBER 18 remains the turf. 140,000 delegates remain the deciders. Whether delegates are to be feared or not, whether they will heed silent room delegations or whether they will fall for monthly salaries and freebies. A few hours away will tell.