Appointing The Chairman And Members Of The Electoral Commission 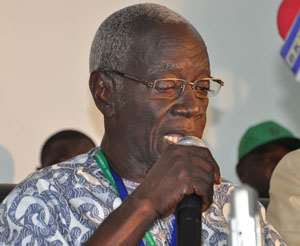 The Ghana Bar Association (GBA) has called upon the President “to seize the opportunity of the appointment of a new Chairman of the Electoral Commission (EC) to appoint a person of integrity who is perceived as capable and just and who will not pander to political pressures from any quarters.” According to the GBA, such an appointment will boost the image and credibility of the Commission.

I agree with the GBA on the attributes that the new Chairman of the EC must possess and strongly disagree with those who argue that the GBA's call is, “at this time, highly unnecessary and uncalled for.” The tenure of Dr. AfariGyan, the current Chairman of the EC, ends in November 2015 and it is not out of place for the GBA, or other stakeholders, to remind the appointing authoritiesto emplace a mechanism that assures that a competent and independent person can be identified and appointed.

Nevertheless, I am concerned that the GBA's call overestimates, perhaps misunderstands, the President's role in the appointment of the Chairman of the EC and has the potential to mislead the President into taking actions that will be ultra vires and inconsistent with his powers under the Constitution.

The framers of the Constitution have imposed varying levels of constraints on the President's appointment power for democratic, governance, prudential and historical considerations. Analyzing and understanding the nature of the President's appointment power is, therefore, important to assuring that the power is exercised in the manner dictated by the Constitution.

In addition to the Level and Nature of the power, the Table also provides the language employed by the Constitution and the positions for which the appointments are made. On close inspection of the Table, one observes that, as a general rule, the more independent the appointee is supposed to be in the performance of his task the more perfunctory the President's power. Such appointees also tend to have good-behavior life tenure. Conversely, the President typically acts alone to appoint persons who are part of bodies set up to advise him. These appointees tend to serve at the pleasure of the President or have tenure that is tied to the President's. In effect, the nature of the President's appointment power is remarkably nuanced and underscores the framers' intention to subject the power to intricate and ingenious checks and balances.

As can be seen from the Table, the President's power to appoint the Chairman and Members of the EC is at level 9a, which means that the power to make that appointment is perfunctory or ministerial. This is because Article 70(2) provides that,“The President shall, acting on theadvice of the Council of State, appoint the Chairman, Deputy Chairmen, and other members of the Electoral Commission.”The plain and ordinary meaning of Article 70(2) is that the President is obliged to act on the advice of the Council of State in appointing the Chairman and Members of the EC.

There are two important points about the “advice” contemplated in Article 70(2). First, it is a term of art. Advice, in constitutional law, is a binding instruction given by one constitutional officer to another. It is not “advice” in the everyday meaning of the word. Second, the advice must be in the form of an appointee not some attributes of the appointee. That is, the Council of State is required to give the President a nominee to appoint not advice in the form of, for instance, “Mr. President, we advice you to choose a man of integrity.”

As another example, both the 1969 (Article 30(2))and 1979 (Article 37(2))Constitutions provided that,“the Electoral Commissioner shall be appointed by the President, acting in accordance with the advice of the Council of State.” This simply meant that both President Edward AkufoAddo(1969-1972) and HillaLiman(1979-1981) had a perfunctory appointment power with the substantive power to appoint the Electoral Commissioner vested in the Council of State.The framers of the 1992 Constitution did not break any new grounds in the process for appointing the Chairman and Members of the EC and clearly intended the meaning of advice as employed in the prior Constitutions.

Nor is that usage and meaning of advice unique to our constitutional history. The phrase originated in the United Kingdom and is still in use many common law jurisdictions. For instance, in the United Kingdom, the Queen appoints senior judges acting on the advice of the Prime Minister. In Canada, the Queen acts entirely on the advice of Canadian Government ministers. In Jamaica, the Governor-General, the Queen's representative, acts in accordance with the advice of the Prime Minister. In all these cases, it is well understood that the advice given is binding and the Queen and Governor-General exercise only perfunctory powers.

Thus, when Article 70(2) of the 1992 Constitution provides that the President shall act on the advice of the Council of State, it contemplates that the Council of State (Council) will put in place a mechanism to search for, vet and nominate a candidate for the President to appoint. The Council could do so in a variety of ways. First, it could work through a committee of the Council. Essentially, this becomes a Search Committee tasked to identify a short list of qualified persons for the Council to choose from. Second, the Council is permitted to commission experts and other consultants to advise it. It could do so here. Third, the Council could advertise the position or call on citizens, political parties, NGOs, etc. to nominate candidates either to the Council at large or to the Search Committee. Finally, the Council could use my least favorite approach − choose someone from within the EC, probably from the other members or a respected senior staff.

The important point is that Article 70(2) not only obligates the President to appoint whomever the Council nominates but it also bars the President from sending a name or otherwise consulting with the Council prior to the nomination. This process can be contrasted to the level 2 appointments where the Constitution contemplates a consultative process. For instance, the President appoints theDistrict Assemblies Common Fund Administrator acting in consultation with the Council of State.By creating subsections of Article 70, the framers highlighted that the process for appointing Article 70(1) officers differs from that of Article 70(2) officers.

The rational for assigning the President a perfunctory role in the appointment of the Chairman and Members of the EC is not far fetched. The EC is, in essence the political referee of the quadrennial political games, and it is flawed constitutional design for the President, a key political player, to have an active role in the EC's appointment. Incidentally, this, in my opinion, is also the reason why Parliament is excluded from this appointment process. It would have been absurd to assign the President a critical role in the appointment process and exclude Parliament, hence the opposition parties, from the process. Thus, a purposive interpretation of Article 70(2) will also support the conclusion that the President's power to appoint the Chairman and Members of the EC is only ministerial.

The framers operated on the assumption that the Council is an independent, non-partisan body and could be trusted with the task of essentially appointing the Members and Chairman of the EC. Thus, the Council's independence and integrity are critical to the effectiveness of this appointment scheme. Nevertheless, because the President has a level 1 power to appoint 11 out of the 25 Council members, it is important that any process established by the Council to discharge its Article 70(2) function is transparent and verifiable. Without a high level of transparency and verifiability, it is impossible to know whether the President has acted on the advice of the Council or impermissibly acted in Consultation with the Council. Thus, sound governance and prudential considerations will require the Council to employ a transparent nomination, vetting and selection process. The Council must not only act independently of the President, in the discharge of its Article 70(2) responsibility, it must go the extra mile to be seen to be independent.