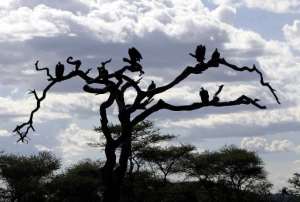 Armand Aucamp, 34, was on Thursday fined 10,000 rand ($902, 707 euros) after pleading guilty to lacing a sheep's carcass with carbofuran, a powerful insecticide.

Aucamp, who lives in the Eastern Cape province, also got a suspended one-year jail term.

Kerri Wolter, the founder of vulture conservation group Vulpro slammed the "very poor (sentence), given the numbers of the vultures killed."

"If one poaches a rhino, the impact is huge and the sentence is either a massive fine or jail term. We also want this to be applied to those who poison vultures," Wolter told AFP.

She said there were around 3,700 Cape vultures left globally. The big creamy-white vultures are found in southern Africa.

Also known as the Cape Griffon, the vultures are is listed as vulnerable by the International Union for Conservation of Nature (IUCN).

Two months ago, dozens of jackals were poisoned at a popular game park in what wildlife authorities described as the country's "worst" ever incident of poisoning.

Park authorities said farmers around the Addo National Elephant Park in the Eastern Cape were responsible for the poisoning as the jackals preyed on their sheep and goats.