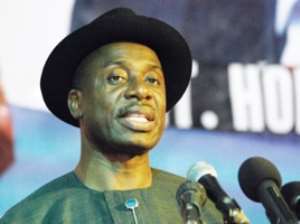 Governor Chibuike Amaechi's Rivers State is with about 90 percent of its residents living beneath poverty line. Doubtlessly, this could have necessitated the reason the state has been witnessing expansion in street hawking by its residents upon the ban to that effect some four years ago.

The hawkers were said to be those who could not afford to pay for stall. Conversely, unemployment in the state is skyrocketing per second, thereby making hawking a thing that cannot be discouraged no matter who is implementing laws to checkmate street trading.

The hawkers are petty traders that start their trade with little or no capital in the oil state, where a store costs as much as N15, 000 to N30, 000 per month. A potential tenant for a stall is mandated by the landlord to pay money in arrears for two years or more. This habit makes it uncomfortable for an average or financially poor resident to afford to pay for a shop.

In the attempt to prevent street trading in Rivers State, the then mortified Obio/Akpor council chairman, Prince Timothy Nsirim built and commissioned an international-like market with about 800 stalls in his Local Government Area, LGA, making him the only elected government officials to achieve such a feat since 2007 that Amaechi mounted the saddle as governor, having also served as Speaker, Rivers State House of Assembly between the period of 1999-2007.

Against the backdrop that many people had thought that street trading was providing job opportunities for most residents, the lawmakers hinged that it was dangerous to be trading along the roads as traders could be straightforwardly beaten down by moving vehicles.

The law which has since been unofficially relegated to the background by both the government and the traders, there was a belief by the violators that the harsh economic realities was it that did not permit them to keep to the law. The violation of the law, it is not only non-indigenes in the state that are culprits, the indigenes too, are involved.

Rampaging hawking in Oyigbo; for example
Street trading is predominant in most streets and towns in Rivers State. This practice is conspicuous along the Port Harcourt-Aba expressway, Port Harcourt, the capital of Rivers State. From Borokiri to Rumuokoro-Tank axis of the East West Road, the story is not different.

In Oyigbo, a conurbation of Rivers State, street trading is posing a precarious hazard as traders have taken most of the streets and major roads in the area for sampling of their wares. Those involved in this loathsome habit are not from the blues, but men and women, boys and girls. They use wheelbarrows and makeshift stalls to sample their items beside the roads and in the streets, before the glaring eyes of the law enforcement agents.

It used to be majorly Igbo people that were into this habit say about five years ago; but in the recent times, Hausas and Fulanis and Kanuris are taking the lead. These people, for example, occupy the Shell Location Road with wares like Watermelon, Yam, Onions, Carrots and so on. They have even made the Express Junction of the city their abode. They sample these items in their different wheelbarrows and, therefore, make the roads difficult to pass through by motorists and perambulators.

Riot by street hawkers
In 2010, when the Rivers State House of Assembly legislated against street trading, the hawkers in what was seen as drama, but a serious matter, turned unruly and vented their anger on the enforcers of the laws who were the officials of the State Ministry of Environment, particularly workers of Environmental Sanitation Authority and some policemen that were with them in making sure that the ban was truly enforced.

At the 82nd Division of Nigerian Army, Bori Camp, Port Harcourt, it was reportedly that three vehicles belonging to the State Environmental Sanitation Authority were destroyed by the union-less hawkers. They also sent a policeman to experience coma, by beating him to a pulp. The same fate befell the officials at Artillery.

Government reacts
The Chief Press Secretary to the State Governor then, Mr. Blessing Wikina said the action had long-established that hooligans costume themselves as hawkers to cause pandemonium in Port Harcourt.

He added that the assault by hawkers on the taskforce along Port Harcourt–Aba Expressway had exposed the reason government banned hawking; he reiterated that street trading remained prohibited and that anyone arrested would be prosecuted.

Government made arrests of about 32 street hawkers. Confirming this, the Divisional Police Officer of Elekahia Police Station Mr. West, as at the time, said the hawkers in his custody would be prosecuted.

Laxity in implementing the laws
It is the common mindset of residents that street hawkers are mainly criminals who disguise as street hawkers to perpetrate their criminal agenda. A source wondered that if they were not, it would not have been easy for them to gang up and take on officials meant to checkmate the ban.

Residents had thought that the beating of the officials would have brought to an end the issue of street trading in the state, but this is 2014 and the ability is growing in torrents than it was in 2010, when the ban was meted out against such trading.

Rather than carry out the laws, some indigenes resorted to saying that it was non-indigenes who were in the act of breaking the laws that banned street hawking, even though that everyone has the right to reside in any state of his or her choice. They forgot that the hawkers were against what they said were the hostile nature of the officials of the Ministry of Environment, whom they alleged were manhandling them, hence riot ensued.

Giving unemployment as reason for hawking
Many residents had since called for the review of the law banning street trading in the state with emphasis that the economic crunch in the state is tellingly. They did not end, they said that the reason many people take to hawking in the street was because of unemployment.

And there was no how these persons into hawking would have taken to stealing, they had said. Many students who were into street hawking said that they engaged in the trade, because there was hardly any advantageously employment anywhere.

The Rivers State Government led by Governor Chibuike Amaechi in September 2012 justified the ban on street trading in Port Harcourt and its environs, when difficult pressure was mounted on it by some residents.

Government explains the ban
In a joint press briefing by the Commissioners of Works and Transport, Mr. Victor Giadom and Hon. George Tolofari, the Commissioner for Information, Mrs. Semenitari reiterated that the ban was imposed due to the dangers associated with street hawking.

In Semenitari's account, "There is no sane society that would allow its citizens to sell their wares along highways and in the streets, because traders are supposed to do their business in properly designated areas and not turn themselves into nuisance…

“Before the ban, street trading had become a complete menace, where streets and highways are littered with waste materials resulting from the activities of street traders... although some members of the public may not have known that beyond littering the streets and causing social nuisance some hawkers also carry arms and, so, have criminal capacity to rub unsuspecting motorists and members of the public.

"As a result of these reasons the State Government decided to end street trading in Port Harcourt for the safety of lives and property because even economically, it will be out of order for government to allow a group of persons do their business without paying tax to government, since a lot of them come from neighbouring States on daily basis and do their business, to go by the close of the day's business."

Officials shove hawker's goods
What could have made the hawkers to confront the officials of the Ministry of Environment might not be unconnected with the allegation that the officials arrest the hawkers and would later shove their wares displayed on tables, break them and set them ablaze.

It was a support that the officials instead of respect the law and the fundamental human rights of the hawkers, would manhandle them.

The street traders always scamper for safety at sighting the sanitary officials who most times come in numbers, not minding the revelation by psychologists that hawking is identical with poverty. But these have belonged to history, as street hawkers have since gone back to the streets fully and, are now the lords of the manor.

Review street trading
Especially the young people who always run after moving vehicles, the government should provide gainfully job opportunities for them, said establishments. The government should note that most roads and streets in the state have been converted to make-shift markets by street traders, they added.

Connoisseurs had said that it behooves on Amaechi to retrospect that Section II (xx) and 35(i) of the Environmental Sanitation Authority Law of Rivers State (Cap 52, Laws of Rivers State of Nigeria, 1999) requires the punishment for appealing in peddling goods on the roads.

According to the law, “It is a criminal offence, punishable with three months imprisonment, for any person to sell or offer for sale, any goods or other articles of trade, at traffic light junctions or in any other unauthorised places in Rivers State.”

A source added that the government requires making use of the “stick-and-carrot approach”, because “for any government to make a constructive scratch in the attitudinal modification of its people, it must be compact in putting in force its laws, while on condition that needed the prerequisites.”