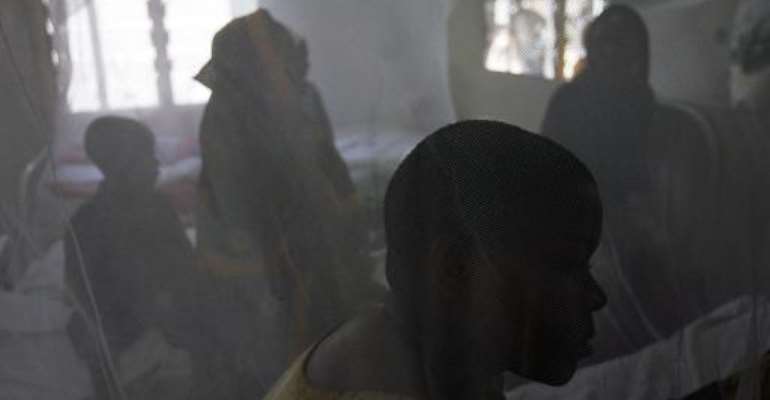 A Tanzanian woman, sit behind a mosquito net at a hospital in Dar-es-Salaam on October 2, 2007. By Roberto Schmidt (AFP/File)

Arusha (Tanzania) (AFP) - Tanzania on Saturday launched its biggest ever campaign against measles and rubella aimed at protecting 21 million children from the potentially fatal diseases.

The public health drive is being backed by the World Health Organization, the UN children's agency UNICEF and the Geneva-based private-public vaccine alliance GAVI.

Children aged between nine months and 14 years will be vaccinated during the week-long campaign.

"The campaign is one of the largest public health intervention efforts ever staged in Tanzania," said a joint statement by the players involved.

"It is engaging thousands of vaccinators and volunteers, covering more than 12,000 schools and 6,600 health facilities over a one-week period."

While generally a mild viral infection, Rubella, or German measles, can be highly dangerous for pregnant women, potentially resulting in fetal death or congenital defects.

Measles is a viral infection best known by its distinctive red rash that remains one of the leading causes of child death despite the availability of a safe and cost-effective vaccine.

In 1980, before the introduction of mass vaccination, measles claimed about 2.6 millions lives annually, according to the WHO.

Since then, fatalities have decreased although it still killed 122,000 people in 2012, of whom a majority were children aged under five.