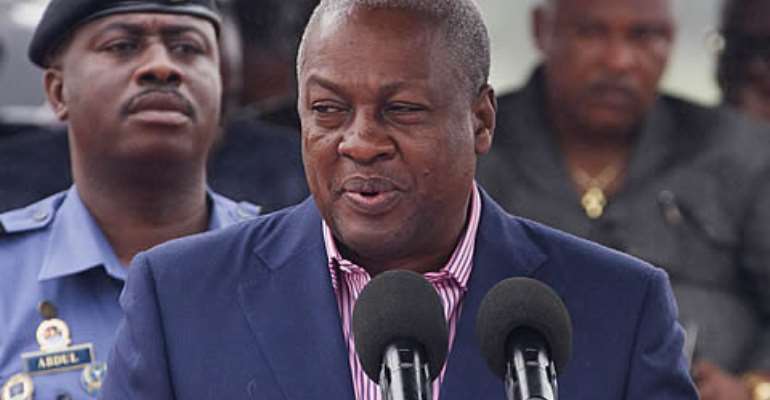 President John Mahama has urged Ghanaian soldiers to complement efforts of their counterparts in the West African sub-region in helping fight the deadly Ebola virus.

He said aside their internal duties of manning quarantine zones and protecting treatment centres, their support is also required to provide an immediate solution which will ensure that the disease does not wipe out all West Africans.

“We currently are confronted with a major public health challenge which has the potential to annihilate all our people in the West African sub-region if we do not contain it early enough”.

Speaking at this year's Military Academy Graduation in Accra, President Mahama said it is imperative for all in the sub-region to help fight the disease.

The recent Ebola outbreak which began in March 2014 is known to be the most serious so far and has affected about 4,500 people – including 236 health workers.

The three worst hit countries; Guinea, Sierra Leone and Liberia, are still struggling to contain the disease. The United States of America, Germany and Spain have also recorded some cases of the disease.

He said not only has government offered a staging base for the United Nations (UN) and United States (US) to conduct operations into the effected areas but as part of its efforts to curb the spread of the disease, provided 100 tonnes of humanitarian relief assistance to the three worst hit countries.

President Mahama said although the disease has not yet reached the shores of Ghana, the devastating effect it may have on the country if any case are recorded here should not be taken for granted and tasked the military to treat its role in the fight against the disease seriously.

“The Almighty God has been good to us and so far spared us from any incident of Ebola in Ghana but we cannot take this for granted, I urge you the Armed Forces to take your role as a part of the National response team with all the seriousness it deserves”.

He said there was the need to take a cue from the US and Spain whom even with stronger health systems are battling the disease and not be complacent in efforts to keep it out of the country.