Rawlings Close To A Deal In Book Case 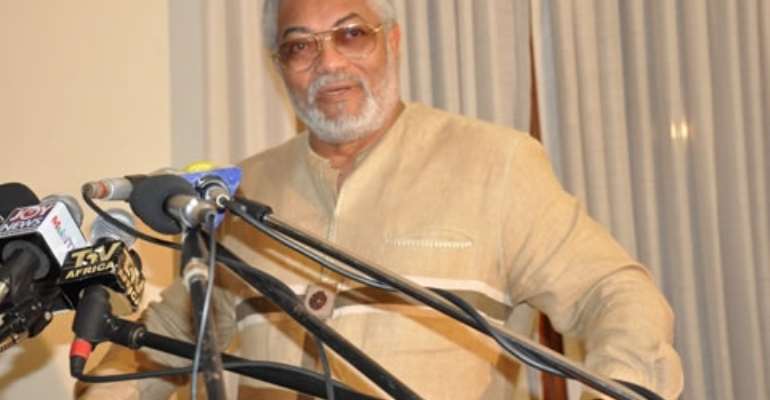 Samuel Ata Akyea
SAMUEL ATA Akyea, counsel for former President Jerry John Rawlings, yesterday told an Accra Fast Track High Court that his client was close to sealing a deal with Professor Kwaku Danso-Boafo, Ghana's immediate past High Commissioner to the United Kingdom, who had wanted to launch a book he had authored on Mr. Rawlings.

He told Justice L.L. Mensah, the new judge handling the case, that they were close to settlement and consequently prayed the court to adjourn the matter for them to appear before him again.

The trial judge consequently had the case adjourned to October 20, 2014.

The case was initially handled by Justice Mustapha Habib Logoh, who was a vacation judge, and so the case had to be transferred to a substantive judge at the beginning of the legal year last week.

The defendant wanted to launch a book entitled, 'JJ Rawlings and the Democratic Transition in Ghana,' which the former president is seeking to have the court place an injunction on.

Samuel Atta Akyea had told the court that they were interested in an   out-of-court settlement if the defendant was willing.

The book was initially scheduled to be launched on August 20, 2014 but Mr. Rawlings wanted the event cancelled altogether, accusing Professor Danso-Boafo of bad faith by reneging on an earlier agreement reached on the book.

Mr. Rawlings in his affidavit in support of the motion, stated that Prof. Danso-Boafo had undertaken to wait for him (Rawlings) to review the book and correct all factual inaccuracies in it, but 'has breached his own solemn undertaking with me and has published it with the view to launching it.'

The plaintiff believes the professor had not extended due courtesy due him relating to the said agreement and had only dropped a special invitation inviting him to the launch of the unapproved book.

The defendant, in his affidavit in opposition of Mr. Rawlings' claims, said the book was not intended to and does not bring Jerry Rawlings and his family into disrepute but was rather authored from an 'intellectual perspective and fair analysis of historical events which occurred during the Plaintiff's (Rawlings') public life from military rule through transition to democracy and written in a very objective light.'

Prof. Danso-Boafo's affidavit said after completing the book, he gave Jerry Rawlings a copy to proof read but the former president, after keeping the copy for well over two years,  had not been able to point out a single sentence he finds unacceptable in the book.

He said even in the affidavit filed by lawyers of the former president, Zoe, Akyea and Co, led by Samuel Atta Akyea, MP for Abuakwa South, they could not exhibit the proofs of a single page which contains the alleged 'several inaccuracies, misinformation and slants which has the potential to poison Ghana's historical records and democratic evolution.'

The book, according to the author, was intended to 'put in the public domain the holistic history of what happened in Ghana under the plaintiff's rule as Head of State, matters which are of public interest, enquiry and debate.'

It said the late South African President, Nelson Mandela, in writing his foreword of the book said it is a 'must read for all Africans', therefore emphasizing the public interest nature of the book.

We stand with Ayine against judicial tyranny, plans to gang ...
48 minutes ago