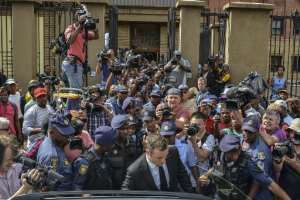 Pretoria (AFP) - Oscar Pistorius tried to show he is the ideal candidate for house arrest Tuesday, as the judge heard the final defence witnesses in the Paralympic gold medallist's sentencing hearing.

He should also clean a Pretoria museum for 16 hours a month, Maringa said.

Pistorius was found guilty last month of negligently killing his girlfriend Reeva Steenkamp in the early hours of Valentine's Day 2013.

The double amputee athlete was cleared of the more serious charge of murder.

His sentencing hearing, which began on Monday, is expected to run for most of the week.

The so-called "Blade Runner" could face up to 15 years in prison, or could dodge a jail term altogether with a non-custodial sentence.

The state has indicated it will call at least two witnesses, whose testimony is expected to finish on Wednesday or Thursday.

Both the state and defence then have 14 days to appeal Judge Masipa's decision.