Blaming The Devil For Everything 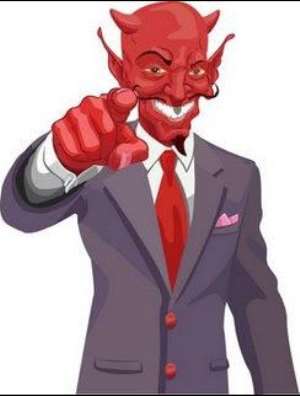 THERE are many perplexing questions in life without any ready answers. For example, in spite of the attempts by metaphysicists to explain notions like existence, cause and effects, space and time to people to understand the world better, there are still unending debates regarding some controversial subjects. One of such topics is religion/spirituality. Whiles some people believe that there is only one god (monotheists), others also believe that there are many gods (polytheists) and some do not even believe that god exists (atheists).

Similarly, people's belief in Satan and his activities differ. For now, I would not like to spark any theological debate as far as Satan is concerned. My beef is the way we sometimes blame him (Satan) for everything. Some students blame him for their failure in examinations when in actual fact they refused to study and preferred to have fun. After some people had sat down, carefully planned and successfully executed a crime, they sing the hymn “Satan made me to do it” with the chorus “so please have pity on me” when they are arrested. Well, some may argue that it was Satan who gave them the idea to commit the crime. But even if that was the case, were they bound to take Satan's advice? I would like to serve a notice of “disclaimer” here; that I am not in any way holding brief for Satan for his activities. As a Christian, I am not unaware of his evil deeds and I know of his potentials and capabilities. But the fact that somebody is known to be a thief does not necessarily mean that he is always responsible for stealing anything that got missing; although admittedly, he could be a suspect.

I remember an interesting incident when I was in the secondary school. It was an offence in my school to visit town or travel without permission. Also, no student was supposed to stay in the dormitory during class hours. But there was a particular naughty boy whose name was more or less synonymous to breaking of school regulations. There was no list of offenders without his name. Sometimes he vehemently denied he was a culprit of some of the offences but no one listened to him. Once his name appeared on the list, he was punished. Some of our seniors therefore took advantage of the boy's bad behavior and got him punished even when he was innocent. The boy fell sick and his house master took him to his parents in Accra for medical treatment.

His absence was known to our senior housemaster as well. Strangely, two days after the boy left for home, his name was mentioned during morning devotion as being among some students who were caught in town at a club the previous night without permission. [At a time the boy was in Accra with his parents??].Knowing that the boy was not in school, almost everybody hooted at the senior who mentioned the name. Apparently, the senior in question just “cut” the boy's name from one of the old lists of offenders and “pasted” it on the current list, just because he knew the boy to be bad.

That is exactly what some of us are doing to Satan- Blaming him for everything, just because he is evil. How I wish he would also change his character! But are we surprised at our behaviour? We shouldn't. We inherited it from our great grandmother, Eve. In fact, the blame game is in our genes. When God queried Eve in Genesis 3:13 why she disobeyed HIM by eating the fruit He commanded her not to eat, Eve replied by saying “Satan deceived me and I ate it” If I were in the Garden of Eden, I would have asked Eve if Satan shoved the fruit through her throat.

Of course, as a Christian I know that Satan tempts. In fact he even tempted no mere a person than Jesus Christ. No wonder God warns us in 1 Peter 5:8 to be wary of him because he could devour us when he gets us. However, we have the power to either succumb or not to his temptations. James 1:14 says that “Each person is tempted when he/she is lured and enticed by his/her own desires”. It was true that Satan tempted Eve but it was obvious that Eve's own desire to taste the fruit was what landed her into trouble.

There are some natural laws/ principles in life that when violated or ignored have their consequences/ implications. For instance, one could not refuse to study and expect to pass an examination. The public has been educated on the consequences of not observing personal hygiene, yet some people still liter their environment, defecate in the open and engage in all kinds of unacceptable lifestyles. Let them fall sick as a result of their behavior, and they would tell you it is Satan that is responsible for their sickness. Many of the motor accidents that occur on our roads, which result in several deaths and serious injuries, could be avoided if drivers observe traffic regulations. Unfortunately we flout the rules and when an accident occurs, we blame Satan for it.

Complying with safety laws regarding the putting up of buildings, etc are for our own good. Sadly, we disregard them and when disasters such as flood, fire, etc occur, it is the devil! Some people are also very lazy. In fact, they are not prepared to do any work to earn a living. I know a gentleman who playsdraft all day. [That is the work he does]. Interestingly such a person would blame Satan for being poor. One of the social diseases which is killing us as a nation is parental irresponsibility. Some parents are so irresponsible that they do not care what their children eat, wear and where they sleep. In fact educating their children is none of their business.

All that they did was that they brought the children into the world. Period! The children therefore “raise”/ “rear” themselves in the streets. In future, when such children become criminals and social deviants due to the fact that they lacked parental love and care, the same parents who neglected them would blame Satan for “destroying” their children. Some people lost their jobs due to dishonesty, insubordination and corrupt practices. Instead of such people to sit down and do a personal introspection, and turn a new leaf, they blame Satan for their joblessness and woes.

Satan may be real and diabolical. Yes, he may tempt us to do evil and seek our downfall but I also believe that sometimes our own attitudes and lifestyles bring calamities upon ourselves. Let us stop blaming him for everything that happens.

The writer is an archivist