By Alan For President Team 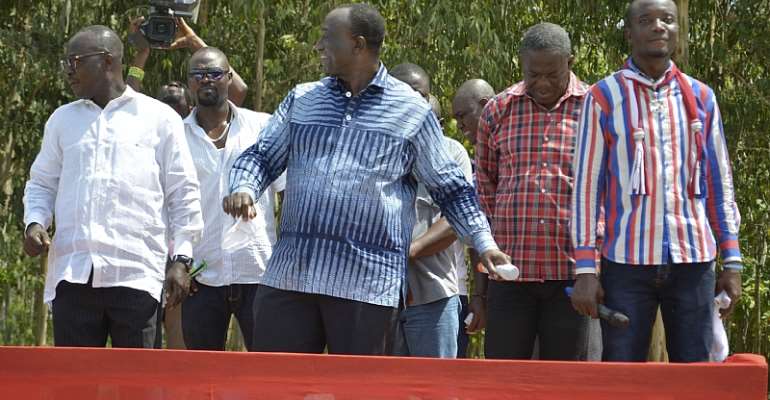 “If we want to win election 2016 elections, I bet you, let's make our polling station officers the front liners of our campaign and it will be a one touch victory for the NPP” These were the remarks of a leading contender for the flag bearer-ship race of the New Patriotic Party, Alan John Kyerematen, during a mammoth rally at Dzodze in the Volta Region of Ghana.

Addressing an electrified crowd, the former Trade Minister bemoaned the situation where the Party sidelined polling station officers in the 2008 and 2012 elections. He pledged not to form a parallel campaign team but instead, use the party structures to ensure that the NPP wins election 2016 with an intensified grassroots mobilization strategy. He assured delegates of his preparedness to provide them with the logistics in a timely manner.

The Former Regional Minister, Hon. Kofi Dzamesi charged delegates to vote for Alan as he has the master key to bring the party to power and transform Ghana into an industrialized nation. He tasked them to ask in their communities, the choice of the people. He said, "Ghanaians are saying they love NPP. They are fed up with the mismanagement of NDC but they want the NPP to present their choice; Alan John Kyerematen because he is humble and has what it takes to create jobs for the youth of Ghana"

It is expected that the NPP will go to polls on October 18th to elect a flag bearer for the 2016 election. Alan calls on delegate to vote for him, Number 3 on the Ballot Paper.

We were not influenced by any party to reject your rice, we ...
47 minutes ago