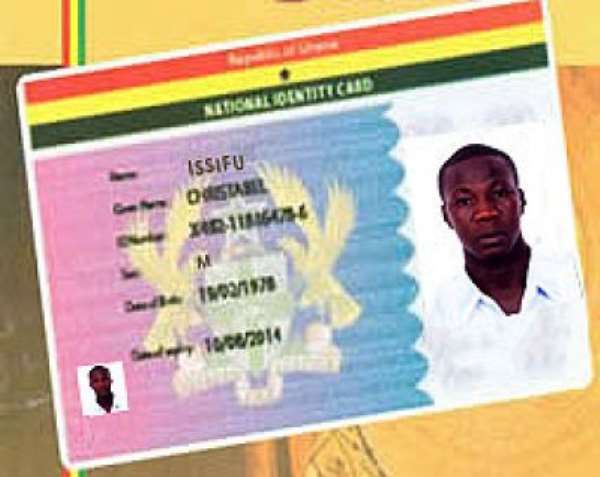 The National Identification Authority (NIA) recently announced that it plans to introduce a new smart National Identification Card to replace the existing one. This decision has generated some controversy with some claiming that the decision is a wasteful venture and would result in Ghana's security being compromised. It is obvious however that there must be limitations in the existing National ID card which has necessitated the NIA's decision to replace it with a new card.

The NIA has indicated that the new card would be a smart card and would thus obviously come with more versatile features that would prove more beneficial to Ghanaians in general. A smart card would obviously be more preferable to Ghanaians especially if its smart features offer more than just the primary Identification features that the current one offers. Nigeria has recently introduced a smart ID card which is versatile and has linkages to banking services and thus offers more benefits to its citizens.

The current National ID card is limited in scope and was implemented without a holistic view of modern trends in ID card systems. For instance there is absolutely no special benefit to the holder of the card that makes it superior to a Drivers License or Passport for identification purposes. In other words, there are no special advantages that the card offers to its holders who have other legally recognized forms of IDs. The new smart card would certainly be of interest to its holders since its focus would not only be on its identification purposes.

The government should also cease the opportunity to introduce the new National ID card to review certain aspects of the existing card which are not in our national interest.

The policy of linking foreigners to our National ID card system needs to be reviewed in the sense that it has implications for our immigration and security policy strategies. It is a fact that most countries around the world where ID cards are issued generally restrict them to only citizens instead of the situation with the current card which can be issued to non Ghanaian citizens whether they are legally resident in Ghana or not.

The prudent policy strategy in this regard is to create a separate card for non citizens in order to develop a database that would provide beneficial linkages for national security and immigration.

It is an open secret that Nationals of Ghana's neighboring countries have registered under the National Health Insurance Scheme and are taking advantage of Ghana's health care system and facilities at a huge social cost to the country.

It is therefore recommended that the policy of issuing National Health Insurance cards to foreigners should also be reviewed as it is counter productive to Ghana's national interests and offers no advantage to the country. It is indeed a disadvantage to the country. We should generally therefore as a country do detailed analysis of programmes and policies before their introduction and implementation in order to avoid implementing policies that operate against our national interest.