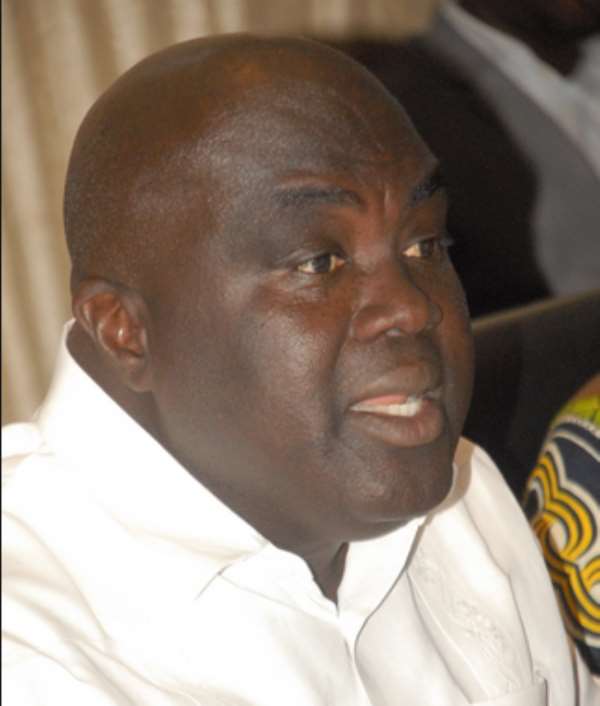 An interesting, if dated, debate on the number of MPs is brewing in Parliament. According to Alban Bagbin, the Majority Leader of Parliament, 'The more number of constituencies the better for us to perform… It is part of decentralization. More MPs are better able to reach out to the people than fewer MPs.'

Osei Kyei Mensah-Bonsu, the Minority Leader, disagrees and has called for a reduction of the number of seats in Parliament from 275 to 200.

According to him, 'The Chamber must be such that anybody can see the Speaker and the Speaker can see everybody. The situation where others are in columns right in the chamber and cannot be seen by the speaker is bad (think of this as the case against columnization).”

The majority leader's argument seems to confound the role of MPs and the district assemblies. Parliament is not and was never conceived as part of the country's local government architecture. The proper path to decentralization is for Parliament to enact appropriate laws to ensure that functions, power, responsibilities and resources are transferred from the Central Government to local government units. Increasing the number of MPs does not enhance decentralization. It bloats the central government.

Although I agree with the minority leader that number of seats should be reduced, I must say I find his 'columnization' argument to be amusing. But rather than simply lamenting the situation, the minority leader should introduce an amendment bill to cap the number of MPs. Even if he does not have the votes to effectuate this proposal, it is important for him to show that he is serious about this and to frame an issue for the 2016 elections.

Significantly enough, this debate would never have arisen under the 1957 or 1969 Constitutions. Both Constitutions appropriately placed a cap on the number of MPs. Article 20(2) of the 1957 Constitution provided that 'the National Assembly shall consist of a Speaker and not less than 104 members to be known as Members of Parliament (MP); but the number of MPs may be increased from time to time by the creation of further electoral districts under the provisions of sections 33, 70 and 71, but in any event the total number of MPs shall not exceed 130 .' In Article 70, the 1969 Constitution provides that 'The National Assembly shall consist of not less than 140 and not more than 150 elected members.'

The resulting draft Constitution (aka the 1 st republic Constitution), which was approved in a referendum, abandoned the time-tested tradition of capping the number of MPs. Article 21(1) of that Constitution provided that 'the National Assembly shall consist of the Speaker and not less 104 Members, to be known as Members of Parliament.' Neither that Constitution nor the National Assembly Act, 1961, provided a clear basis for creating or increasing the number of constituencies. However, because that period heralded the era of the imperial presidency (to quote my brother Professor H. Kwasi Prempeh), it goes without saying that the lack of a cap on the number of MPs was just a device to allow the imperial President to manipulate the legislature by creating more constituencies as needed to allow him to exercise his imperial powers.

There is a simple solution to end this needless debate. Parliament must amend the Constitution and put a cap on the number of MPs. I will support any number between 150 and 200.

Finally, let me revisit the Constituent Assembly and Plebiscite Bill (1960) as it provides very useful lessons for us. That Bill was used to traverse the amendment architecture in the 1957 Constitution and paved the way for a new Constitution that buried most of the sound principles in the 1957 Constitution. Among others, the Constitution ceded the sovereignty of Ghana to a union of African states and territories and gave the President the power to dissolve the National Assembly at will as well as hire and fire judges of the superior court without cause. Notwithstanding this glaring subversion of the constitutional principle of separation of powers, 1,008,740 voted to approve the draft constitution with only 131,425 voting against it.  In 1964, Ghana became a one party state in another referendum where 2,773,920 (99.91%) voters are reported to have voted in favor of the one party state.

The 1960 Constitution is a reminder of what happens when we allow a President to bypass the amendment architecture. This is why I maintain that the President has no power under the 1992 Constitution to appoint a Commission to review the Constitution.

Moreover, that is why I will argue that the process where an unelected Constitution Review Implementation Committee produces amendment bills, with such widespread consequential changes to the Constitution, that is forwarded to the Speaker who refers it to the Council of State on the blind side of the Members of Parliament is unanticipated by the framers of the Constitution; is completely alien to Chapter 25 of the 1992 Constitution (or any part of the Constitution); does violence to Article 1 of the same Constitution; is antithetical to constitutionalism, separation of powers and democratic governance; and represents a serious attempted executive engineered constitutional coup that must not be allowed to stand.