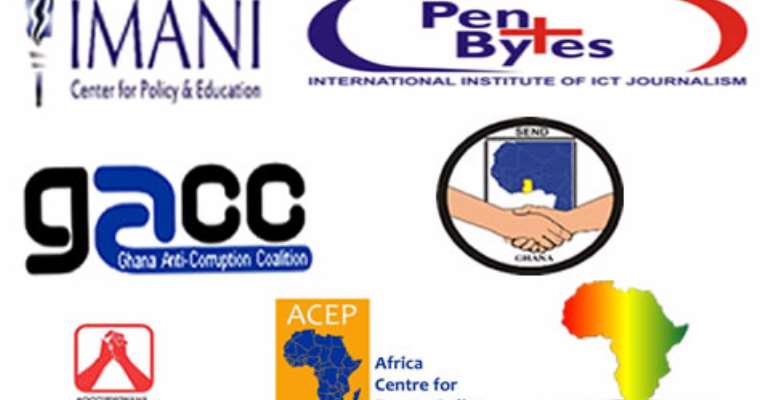 A coalition of Civil Society Organisations (CSOs) in the country have asked government to begin broader consultations with Ghanaians on talks to seek bailout from the International Monetary Fund.

The Coalition said in a statement Tuesday "citizen inclusiveness in the discussions will allow the much needed citizen buy-in which had been problematic with previous bailouts so that this one becomes the last bailout ever that Ghana will seek."

Read below the statement from coalition made up of FAT-Africa, IMANI, SEND-Ghana, Ghana Anti-Corruption Coalition, ACEP-Africa, Penplusbytes, and Occupy Ghana:

Following Ghana's request for IMF bailout, initial discussions between the government and the IMF have started.

During these discussions last week, Ghana is reported to have made a strong case for economic support while the IMF sought clarity on proposals by government on how the economy would be rescued.

While conceding that the negotiations must necessarily be between government and IMF, it is important to stress that the ultimate Agreement will be for the people of Ghana and hence the need for broad consultation with citizens during the course of the negotiations.

It is our considered opinion that citizen inclusiveness in the discussions will allow the much needed citizen buy-in which had been problematic with previous bailouts so that this one becomes the last bailout ever that Ghana will seek.

This is particularly important because, in the past, lack of consultation has resulted in difficulty with citizen participation.

This problem can be addressed if non-state actors can be mobilized to contribute to the outcome of the negotiations.

Civil society must collate the views of identifiable bodies and the cross section of the society to arrive at a common position on the various issues to be negotiated.

It is for the above reason, that the ad-hoc CSO platform on the IMF bailout has been formed.

The platform will:
- Initiate a National Conversation and hold a Forum to discuss and agree on common positions on the key issues by civil society to inform both GOG and IMF;

- Engage the media, academia, faith based organisations etc. to embark on a sustained campaign to educate the citizens of Ghana on the bailout.

- Endeavour to reach as many citizens as possible by deploying ICT tools and interventions to provide easy to comprehend messages through an interactive two-way SMS system, use of social media to encourage vibrant citizens' discussion around the subject matter and an online platform to serve as one-stop-shop knowledge and resource center and a platform for citizen based advocacy.

- Agree on mechanisms to monitor the implementation of the final agreement that comes out of the negotiations.

Ultimately, the platform seeks to promote public awareness and inclusiveness in the bailout discussions and to arrive at common positions on the key issues for the benefit of both GOG and IMF.

The initiators (listed below) of this ad-hoc Platform to start the National Conversation extend open invitation to all CSOs, NGOs, Professional groups, Academia, Trade Unions, Faith based organisations as well as all interested identifiable bodies who believe in citizen inclusiveness in major national issues to join the platform.