Kenyan leader in Netherlands ahead of landmark ICC hearing 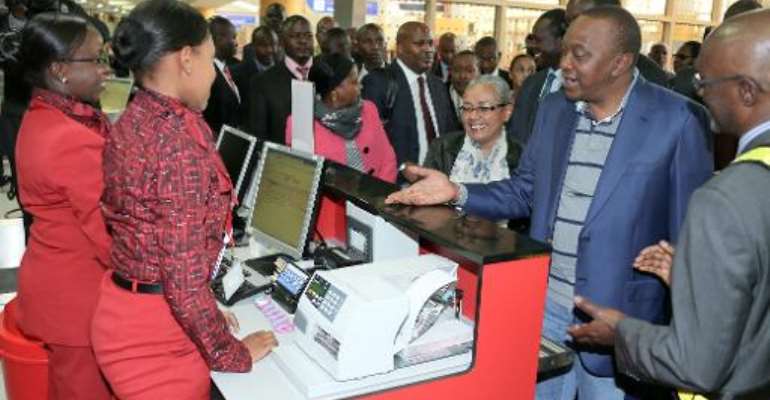 Kenyan President Uhuru Kenyatta (2nd-R) and First Lady Margaret Kenyatta check in alongside other passengers at Nairobi airport as they head to the Hague on October 7, 2014. By PSCU (PSCU/AFP)

Amsterdam Airport Schiphol (Netherlands) (AFP) - Kenyan President Uhuru Kenyatta arrived at Amsterdam's Schiphol airport on Tuesday ahead of a landmark appearance before the International Criminal Court, where he faces charges of crimes against humanity.

"He has arrived in the Netherlands," his spokesman Manoah Esipisu told AFP shortly after 4:00 pm (0200 GMT).

Kenyatta, who will become the first sitting president to appear before the chamber, temporarily handed power to his deputy William Ruto earlier in the day before taking a regular flight as a "private" citizen to Amsterdam.

"There is nothing he has done in action or deed as president that would merit him being here in court, that's why he travelled here as a private individual," Esipisu said.

Around a dozen of Kenyatta's supporters were at Amsterdam's Schiphol airport to welcome him, an AFP correspondent said.

Kenyatta is due to attend a "status conference" hearing on Wednesday at The Hague-based ICC, after prosecutors asked for an indefinite delay until Nairobi hands over documents they believe could clinch their case.

The Kenyan leader has appeared at the ICC before, but not since he was elected president in March 2013.

On Monday Kenyatta told parliament he had taken the "unprecedented" move to temporarily hand over power to Ruto -- whose trial at the ICC has already begun.

"Let it not be said that I am attending... as the president of Kenya," he told a special session of parliament as several lawmakers stamped their feet in support.

Esipisu told AFP that Wednesday's hearing "is a procedural event, not really anything to write home about."