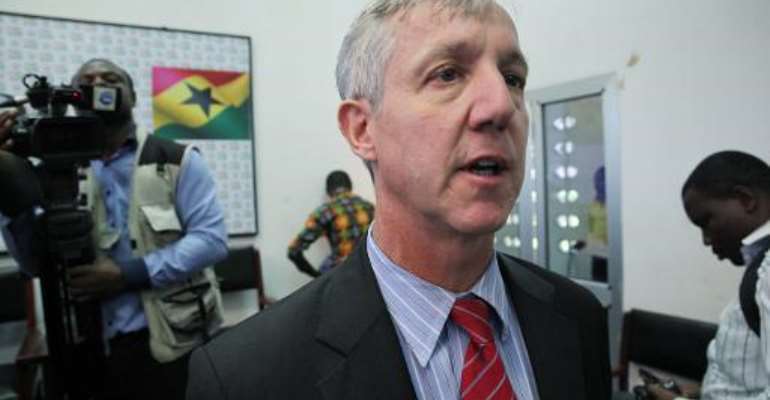 Anthony Banbury, head of the UN Ebola response team speaks to the media on September 30, 2014 in Accra. By Chris Stein (AFP)

Accra (AFP) - The new head of the UN Ebola response team vowed Tuesday to take swift action on the crisis, saying ambitious targets must be met to prevent the spread of the virus worldwide.

Anthony Banbury's pledge came after warnings that Liberia was on the brink of collapse and that thousands of children who have lost parents to the epidemic faced being treated as outcasts.

Sierra Leone's government was meanwhile forced to deny that Ebola had been defeated, after hundreds took to the streets in the belief that there were no more confirmed cases.

In Ghana's capital, Accra, Banbury, the special representative for the UN Mission on Ebola Emergency Response (UNMEER), said the team was hoping to stem the spread of the disease.

"We don't know how long it will take. We hope to do it as fast as possible and to close the UNMEER mission as quickly as possible," he told a news conference.

UN Secretary General Ban Ki-moon set up UNMEER earlier this month in response to criticism of the world body's response to Ebola, which has killed more than 3,000 people in west Africa this year.

An advance team arrived in Accra on Monday amid growing concern over the spread of the virus, particularly in Liberia, Guinea and Sierra Leone.

The world's worst Ebola epidemic has claimed 3,091 lives in five west African countries as of Saturday out of 6,574 infected, according to the World Health Organization (WHO).

The international mobilisation includes a planned 3,000-strong US military contingent to Liberia, while Britain is to set up a medical centre in Sierra Leone.

Some 150 US troops arrived in Liberia at the weekend with a 25-bed field hospital which was delivered by three C-17 cargo aircraft, Pentagon spokesman Colonel Steven Warren said Monday.

The field hospital will be set up for health workers infected by the Ebola virus, he added.

Banbury said UNMEER officials were also on the ground in Ebola-hit nations, without specifying numbers or locations, adding that the world was now helping to confront the disease.

"If UNMEER was never created, if the world was not responding, the number of cases would go from whatever they are now, we don't know for sure, maybe around 20,000, to 1.4 million," he told reporters.

"Then every country in the world would be at risk."

"Within 30 days we need to put in place almost all the material resources necessary... Those are very, very ambitious targets but we have no choice but to pursue them."

Experts warned that with its collapsed health service, sick and poorly equipped security forces and broken economy, Ebola risked plunging Liberia back into a spiral of violent civil unrest.

"If we have thousands or tens of thousands more deaths, that's going to have a very destabilising effect," said Sean Casey, head of the International Medical Corps' anti-Ebola operations in Liberia.

In Geneva, Liberian Commerce Minister Axel Addy said Ebola risked reversing economic gains made since the end of the civil war in 2003, compounding a previous slowdown in economic growth.

Elsewhere, the UN children's agency said thousands of children mourning dead parents and in urgent need of support felt "unwanted and even abandoned" by frightened and suspicious relatives.

"The fear surrounding Ebola is becoming stronger than family ties."

In Sierra Leone, crowds surged onto the streets of the northern commercial hub of Makeni, chanting "Ebola is no more" and "Ebola is defeated".

The government was forced to issue a statement after locals said celebrations began when a group of suspected Ebola victims were released from a holding centre with negative lab test results.