'Social media is affecting the English of students'- Ablakwa 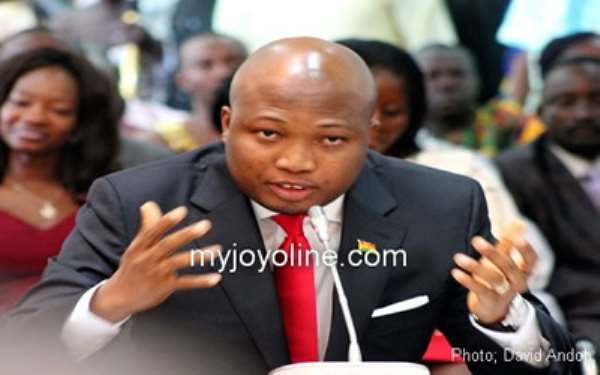 Ghana's Deputy Minister of Education in charge of Tertiary Education, Samuel Okudzeto Ablakwah has stated that the advent of social media is negatively affecting the writing and speaking of English language among students in the country, especially those in the Senior High School (SHS) level.

According to Mr. Ablakwah, even though social media has been very helpful when it comes to communication among friends and families, students are transferring their ways of writing on social media platforms into the examination rooms and the way they speak as well.

The North Tongu  legislator said this when he officially launched a  National Essay Competition instituted by the  UBA Foundation, the Corporate Social Responsibility (CSR) arm of the United Bank for Africa (UBA) in Accra .

He noted that English and Mathematics subjects are the major challenges in examination among students, reiterating that it is now easy and common to see most students using short-hands during examination.

Applauding UBA for initiating the competition geared towards providing Senior High School students in Ghana a stage to demonstrate their writing and speaking skills, Mr Ablakwah called on Ghanaians and corporate institutions to assist the government in lifting the image of the educational sector in the country.

The minister noted that last year the government spent GHc5.7 billion in the educational sector, which represented 6.1% of the country's gross domestic product (GDP).

“Ghana has already achieved the UNESCO educational record of 6% and that is a plus for us as a country,” said the minister.

Mr. Ablakwa said last year, government increased the enrolment at the basic education sector to about 813,000.

He stated that there are 839 secondary schools with about 400,000 students across the country and for that matter hoped the competition will be free and fair, and give equal opportunity to every applicant.

The increased usage of social networking websites has become an international phenomenon in the past several years. What started out as a hobby for some computer literates has become a social norm and way of life for people from all over the world. This, according to many educationists, has however had its own effect on the English language usage of users as   many are deviating from correct spelling and grammar usage.

According to a 2013 survey conducted by social media monitoring company, Brandwatch, social networks have transformed modern day English, with Twitter presenting the greatest threat.  Per the survey, total of 0.56 per cent of words posted on the micro-blogging site were either misspelt or unofficial.

The essay competition is a follow up on the Real Africa initiative of the UBA Foundation, which involved giving out literature books to secondary school students to help rekindle the dwindling reading culture among the youth in Africa.

The foundation has stated that entries for the competition have been open and the closing date for entries is 31st October, 2014.

The Managing Director (MD) and Chief Executive Officer (CEO) of UBA Foundation, Madam Ijeoma Aso , announced that the winner of the competition will take home GHc17,700.00.

The first runners-up and the second runners-up will take away GHc12,390.00 and GHc7,080.00 respectively.  Also the first 10 students together with the winners will get laptops each.

The applicants are supposed to summit handwritten essay of not more than 750 words, on the topic, 'Is Social Media a safe place to make friends'? , should be submitted along with their complete contact information, (school name & address, residential address, phone number and email address).

The judges made up of professors, are expected to name the winners in December, 2014. Out of the number of entries received, 12 finalists will be announced in early November, 2014 and out of the 12 the best three will be named.

Prior to announcing the best three, the 12 finalists will be camped in Accra to defend their essay to a high panel.