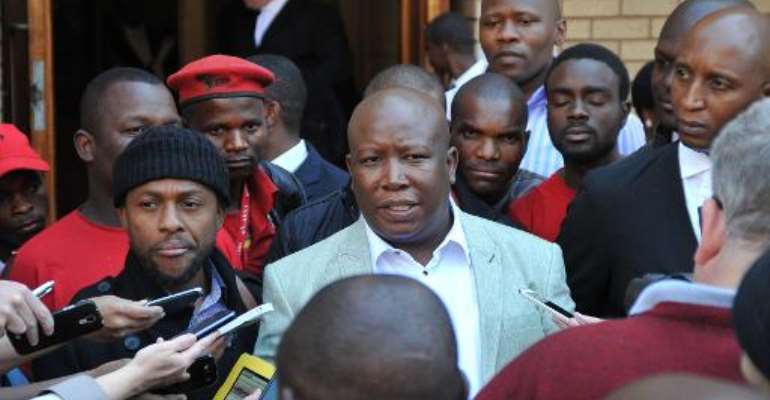 Cape Town (AFP) - Allegations of sleaze among top South African politicians comes into sharp and ironic focus on Tuesday as the country's most vociferous anti-graft campaigner goes on trial -- for corruption.

In the dock will be Economic Freedom Fighters (EFF) chief Julius Malema, who famously led chants of "Pay Back the Money" against fellow graft suspect President Jacob Zuma as parliament collapsed into chaos last month.

If he is convicted, Malema will lose his seat in parliament, neatly solving the problem of how the government deals with his troublesome questions -- in the assembly at least.

But Zuma cannot be feeling too comfortable as he watches the law take its course -- relentless efforts to reinstate 700 charges of corruption against him have received fresh impetus.

The charges were dropped shortly before he became president in 2009, allegedly because of interference in the prosecution case by his political opponents.

But new details emerged in local media this week of how Zuma is said to have accepted a bribe from the French arms firm Thales by uttering the coded phrase: "I see the Eiffel Tower lights are shining today".

The government denies any wrongdoing.

The charges relate to a multi-billion dollar arms deal signed in 1999 which has long haunted Zuma and other government officials alleged to have taken kickbacks.

However, in an indication of the breadth of the suspicions against the president, that is not the money that Malema was demanding that Zuma repay.

He wants Zuma to cough up the $24 million of taxpayers' money spent on "security upgrades" at his rural home -- enough to buy several mansions in Johannesburg or Cape Town.

In another irony, the demand to "pay back the money" could just as easily be directed at taxman's champion Malema himself -- he owes $1.6 million dollars in unpaid taxes.

It is far from clear how the 33-year-old politician got his hands on enough money to owe that much in tax, though a clue could lie in the fact that he was leader of Zuma's African National Congress's youth wing for four years until 2012.

The wannabe graft-buster faces charges of fraud, corruption, money-laundering and racketeering over his links to a $5 million government contract.

- Champion of the poor -

The fact that both men continue to make pronouncements about their determination to fight corruption can at times leave ordinary South Africans shaking their heads in grimly amused disbelief.

But the nausea-inducing greed apparently rife among the heirs to liberation icon Nelson Mandela, in a country where poverty remains widespread, has undermined the nation's early hopes.

"The sad experience of the arms deal saga was a rude awakening for our country which, emerging out of apartheid, naively believed that our politicians -- many of whom had devoted their lives to fighting for freedom -- could be trusted to act in the public interest without lining their pockets," the Sunday Times wrote in an editorial this week.

Despite this, both Zuma and Malema can count on massive support as they fight the allegations against them.

The ruling African National Congress has shown that it is prepared to use all of its power as a government to protect the president, while EFF militants are expected to turn out in force to support their "Commander in Chief" at his trial.

Police have said security will be tight and roads will be closed around the high court in Polokwane, north of Johannesburg, "to ensure peace and stability".

In a final irony, many of those supporting Malema presumably believe his reinvention of himself as a champion of the poor, which sees him swap his designer outfits for workers' overalls when he appears in parliament.