CHRAJ Boss Not The Only Prey...There're Equally Bigger Fishes Out There—IMANI CEO 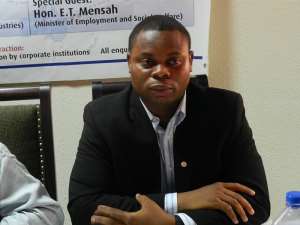 Franklin Cudjoe, Founding President and CEO of Policy Think Tank, IMANI Ghana, appears unimpressed with government's backing of any form of investigations into the alleged misappropriation of funds by Lauretta Lamptey, Commissioner for the Commission on Human Rights and Administrative Justice (CHRAJ).

He rather prefers government revisits the scandal involving Subah Infosolution and ensure the organization involved pay its dues to the State.

To Franklin Cudjoe, Government should ensure Subah Infosolution and all other entities indicted in other corruption-related issues refund the sums of monies they received from the State.

The IMANI boss was speaking to the news that government, through the Communications Minister, Dr. Edward Omane-Boamah, has indicated its resolve to abide by any decision or recommendation that will come from the Auditor-General's investigation into alleged misappropriation on the part of CHRAJ's boss.

Subah Infosolution, a relatively unknown company, was engaged by the Ghana Revenue Authority in 2010 to provide telecom traffic monitoring services for revenue verification for the tax agency, specifically collect “Talk Tax”, which the GRA was collecting on behalf of the government. It was primarily set up to take up the telecom monitoring contract and the money that came with it.

They were to find out whether the correct amount was being paid by the telecom companies namely; Tigo, Vodafone, MTN, Glo, Expresso and Airtel.

Later, several individuals and institutions raised eyebrows on the deal and called for investigations.

Also, a ranking Member of the Finance Committee of Parliament, Dr. Anthony Akoto Osei requested the Minister of Finance, Mr. Seth Terkper to furnish the house with further and better particulars detailing the business agreement between an IT firm, Subah Info solutions Limited and the Ghana Revenue Authority (GRA) to enable it have a better understanding of the contract.

The controversial agreement between the two entities, according to the committee was not known to Parliament, hence its request for the details.

A government committee was set up to investigate the alleged payment of GHC144 million to Subah Info Solutions Ghana Limited by the GRA for no work done.

At the end of the investigations, the committee's report implied that the contract was legally awarded and that Subah Info Solutions Limited deserved the monies paid to them.

The report also said Subah justifiably incurred cost in executing the contract for which reason it was paid 74.3 million cedis contrary to the reported 144 million cedis for services rendered.

However, the report admitted that Subah failed to fully execute its contract but blamed this on the unwillingness of Telecom companies to allow Subah to attach equipment that will independently monitor revenue declared.

Ms. Lauretta has for the past week been making news headlines. She's reported to have caused to be paid from state coffers, a monthly rent rate of nearly $5,000 on her plush AU Village apartment for a period of 33 months while over $180,000 was also spent on the renovation of her official bungalow.

Aside this issue, it has also emerged that the Auditor-General charged the management of the CHRAJ, to refund without delay a sum of GHC 89, 551.79 to government coffers.

According to the A-G's report, in 2012, the service queried CHRAJ for circumventing the procurement law in the award of contract for the renovation of the Commissioner's official place of residence.

The report indicted CHRAJ for breaching provisions of the Public Procurement Act (PPA), 2003 (Act 663) while securing accommodation for the Commissioner.

Speaking on Peace FM on "Kokrokoo", Franklin Cudjoe, lauded the government and the Attorney General for taking up steps to retrieve the money from the Commissioner saying the A-G's action will be an example to other public and government officials who tend to be corrupt.

“It is good that this is coming from the government. It is very good but at the same time to keep the spotlight on the issue; these other steps are being followed. And we will keep the matter in the media for as long as it matters…I like the speed with which the Minister and the government is attending to this...Right now, the President should just thank the Commission for the work done because we've heard too much, and then let the Police and the Attorney General take over immediately effectively,” he stated.

Mr. Cudjoe however wants President Mahama to act quickly on the SUBAH case because in his conviction, it's “one of the most wicked of scandals to have been perpetuated in the telecom sector."

He also wants the government to look into other scandal-related cases such as the Savannah Accelerated Development Agency (SADA) project and others with immediate effect.

“Look at SADA, look the joke with which that thing was also done. I mean how do you pay 17 million dollars to burn trees, plant new trees for the trees to die within a month or two?" he asked in a voice filled with incredulity.

To Franklin Cudjoe, although Ms. Lamptey's misconduct should not be overlooked; there are however "equally bigger fishes that are lying down without any action" and the one that matters most to him "is the SUBAH thing."

Postpone 2020 Elections To Next Year – Methodist Minister
36 minutes ago