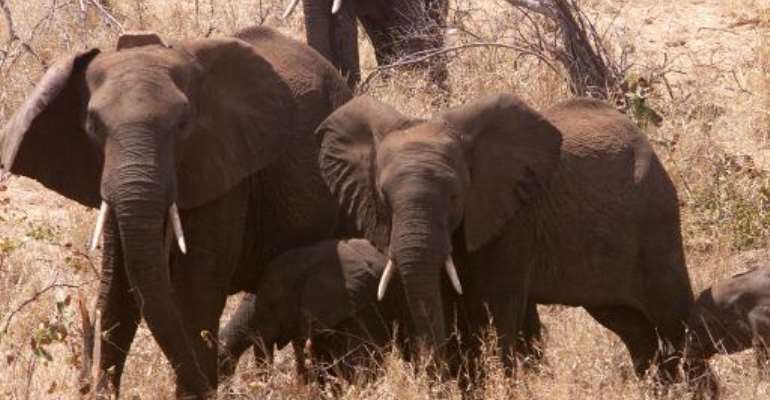 Elephants wander in the bush in the Great Limpopo Transfrontier Park in Gaza, Mozambique, October 4, 2001. By Themba Hadebe (Pool/AFP/File)

Maputo (AFP) - Poachers slaughtered 22 elephants in Mozambique in the first two weeks of September, environmentalists said Monday, warning that killing for ivory by organised syndicates was being carried out on an "industrialised" scale.

Citing data from the southeast African nation's largest game reserve, Niassa, an advisor to the Wildlife Conservation Society (WCS), Carlos Pareira, said "in the first two weeks of September alone we counted 22 elephants that had been killed."

He was speaking at a meeting of Mozambican officials, law enforcement agents and diplomats in the capital Maputo.

Mozambique is under pressure from international conservation groups to do more to curb rampant poaching.

Until recently poaching was not considered a crime and those arrested often got off with a fine for illegal weapons possession, frustrating conservation efforts.

A new law passed in June toughens penalties for poachers, including hefty fines and jail terms of up to 12 years for killing protected species.

The US ambassador to Maputo, Douglas Griffiths, said the law was a "crucial step" but that Mozambique would need to "ensure it is respected by all and fully implemented."

The two-day seminar organised by the national prosecution office is aimed at educating magistrates, police commanders and prosecutors on the new legislation.

Likening the crisis to a "national disaster," the WCS, a New York-based environmental group, warned that organised crime syndicates were killing between 1,500 and 1,800 elephants a year, mostly in northern Mozambique.

The vast Niassa reserve, in the north, is twice the size of South Africa's Kruger National Park. It is co-managed by WCS with the Mozambican authorities.

The poachers use automatic weapons and high-calibre hunting rifles. But spikes concealed in the bush had also been used to wound animals in the coastal Querimbas reserve, causing them slow and agonising deaths from gangrene.

"The killing of elephants in the north of Mozambique... is reaching proportions never seen before," said Pareira.

"The killing of elephants is being industrialised," he said.

Ivory from Mozambique has been traced to markets in Hong Kong and Taiwan but trinkets and carvings are also sold on craft markets in Maputo, the meeting heard.

Although the new conservation law was approved in June, it will only go into effect at the end of the year, officials said.