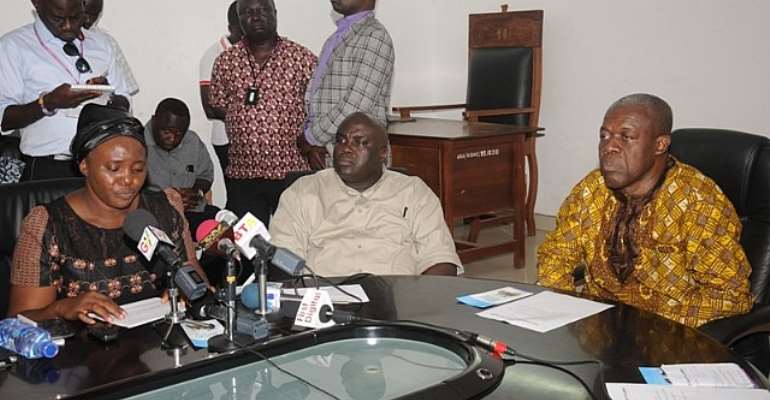 Accra, Sept.18, GNA- Vice President Kwesi Amissah-Arthur has inspected a pilot project tointroduce the use of the Biofil Toilet System in the La Dadekotopon MunicipalArea.

Currently, there arefour Biofil Toilet Systems being piloted by the La Dadekotopon MunicipalAssembly, in collaboration with Ministry Local Government and Rural Developmentat the cost of GH4000 each.

The introduction ofthe Biofil Toilet System has become more imperative because, out of the 1,500reported cholera cases, fifty per cent had come from the La Area.

The Biofil ToiletSystem combines the benefits of the traditional and those of the compostingtoilets, while eliminating the drawbacks and the disadvantages of both systems.

The key differencebetween this system and the traditional septic tank system is the size of thedigester and the rapid drainage of water from the waste product.

Vice PresidentAmissah-Arthur, speaking to the media, commended the engineers and scientistsfor their relentless work to introduce the technology in order to improve thehealth needs of the people.

He bemoaned thesituation where cholera, which is a nineteen century diseases should be killingpeople in the capital city of the country.

He said thetechnology, which was developed by a local engineer with the support ofscientists from the University of Ghana, is helping to solve major healthproblem that the nation faces.

He urged theMinistry of Local Government and the Metropolitan, Municipal and DistrictsAssembles (MMDAs) to look at the new technology and provide resources, in orderfor the technology to be replicated in other parts of the country, especiallyin the coastal areas, where the people prefer to defecate at the beaches.

He explained thatBiofil Toilet System required little space to put up and allow the system tooperate more efficiently under aerobic conditions, eliminates the foul smellsassociated with anaerobic decomposition and reduce the need for excavation of alarge septic tank to deposit the faecal matter.

Mrs Rita OdoleySowah, Chief Executive of the La Dadekotopon Municipal Assembly said themunicipality had been greatly challenged by the cholera outbreak, because outof the 1,500 reported cholera cases, fifty per cent had come from the La Area.

She said since theoutbreak cholera in the area, a host of other dignitaries, including the VicePresident, had helped to ensure the evacuation of refuse from the municipality.

She commended theMinistry of Local Government, the French Embassy and Biofil Company for comingto the aid of the assembly.

Professor SamuelSackey, a Bio-chemsit at the University of Ghana explained that the BiofilToilet System works by providing an enclosed environment for the naturalprocess of aerobic decomposition.

He said thisenvironment is similar to which exists on a forest floor decomposing wildlifedroppings, and converting them into valuable nutrients for the vegetable touse.

He said the flushwaste matter is channeled into the biofil digester and the liquid waste isinstantly separated from the solid matter.