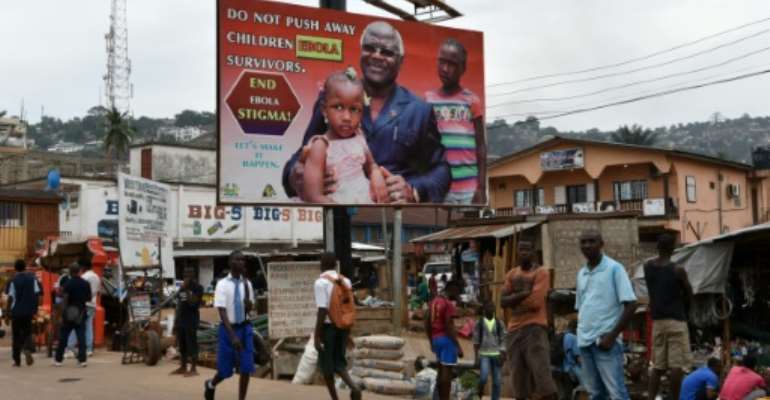 People walk under an Ebola's information board featuring Sierra Leone's president Ernest Bai Koroma on January 22, 2016 in a street of Freetown.. By Sia-Kambou (AFP/File)

Freetown (AFP) - Ebola survivors jostled with police in Sierra Leone's capital on Monday as they protested perceived government inaction over their care in a health system badly hit by the virus.

Several hundred protesters in Freetown gathered in the city centre calling for the free health care and scholarships for their children they said had not been delivered.

A smaller protest in the city of Makeni attracted around 100 people, who delivered a petition to local government officials.

The president of the Ebola Survivors Association in Makeni, Mohamed Conteh, told AFP that planned provisions had "so far not had any impact on our lives."

"We were promised scholarships for child survivors, free health care, while adults were supposed to be given livelihood skills and other benefits," one demonstrator told AFP.

The group carried placards that read "our living conditions are deplorable" and "we demand to be cared for."

Sierra Leone's minister in charge of social welfare was recently sacked and his replacement has yet to take office, delaying already slow work.

According to Doctors Without Borders (MSF) there are more than 4,000 Ebola survivors living in Sierra Leone, while the virus killed many of country's already limited number of health workers.

The economy has also suffered from being paralysed for so long, limiting the government's ability to cope, experts say.

The Ebola virus can stay in semen for at least nine months after a patient has recovered, six months longer than previously thought.

Scientists are working to establish how long it can persist in other bodily fluids and tissues such as the spinal column and the eye, and for how long it could remain infectious.

"Ebola survivors are a particularly vulnerable group, who face continuing health challenges such as joint pain, chronic fatigue, and hearing and vision problems," MSF said in a recent report.

"They also suffer from stigmatisation in their communities and need specific and tailored care."

A resurgence of Ebola in a rural Guinean community has killed seven people in the last few weeks, and two more cases were confirmed in Liberia last week despite the epidemic being declared over.

Although the outbreak -- the worst on record -- has officially claimed more than 11,300 lives since it first began in Guinea, a significant number of deaths are believed to have gone unreported.

The epidemic was first reported to have spread to Sierra Leone in May 2014.