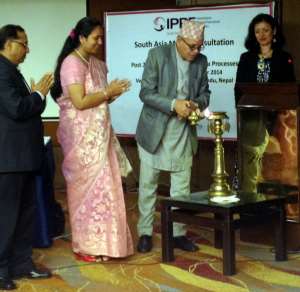 Abused by her own family in childhood, Bela (name changed) was sold by a relative and trafficked to India. She eventually came out of her harrowing ordeal, turned her life around and became a peer counsellor and educator with Family Planning Association of Nepal (FPAN). She was supported for 5 years by the anti trafficking project of FPAN. But once the project got over she was once again left to fend for herself.

She still distributes contraceptive pills for FPAN for which she gets a very small stipend which is just not enough to support her and her 3 children. Her question is-- Even after coming out of a harrowing life, what is there for me? I have been telling everyone my story, which is the story of many others too. You have my story, but what have you given me in return? What is the goverment doing for people like us?

Will future sustainable development goals (SDGs) help in improving the lives of Bela and thousands of others like her who are pushed into the flesh trade due to poverty, greed and a skewed power dynamics. It is not enough to make survivors mere brand ambassadors for a cause. They need to be rehabilitated too.


16 years old Meena (name changed) studies in class 11 and also works as a volunteer with FPAN. She is living with HIV –an infection that killed her parents years ago. She feels that HIV/AIDS is a big problem in her part of the world, mainly due to large scale migration of workforce in the absence of any local jobs. In her experience, community people do not feel comfortable speaking openly about their problems of sexually transmitted infections (STIs). Women hesitate to come to the mobile clinics run by FPAN for free treatment of STIs for fear of discrimination. They think that getting STIs will be taken as being promiscuous.

Ramkali works as a peer educator and her responsiblities include distribution of contraceptive pills and condoms. Working with Muslim community is a challenge for her as they are prohibited to come out of their housesdue to cultural taboos. Moreover, they are just too shy and nervous to discuss anything about family planning, afraid that others from their community would come to know of it. Ramkali's tireless efforts have made them shed their inhibitions to some extent. They have started using contraceptive pills but without their husband's knowledge.

As it is rigid mind sets are hard to change. Add to this the misery of natural calamities. The recent floods in Nepal washed away/destroyed all the contraceptives in her clinic and she could not reach out to women in need. Contaminated water and unhygienic conditions made matters worse spreading diseases including reproductive tract infections. But patients could not be referred to other specialised clinics due to blocked and damaged roads.

Another volunteer of FPAN, Igrom Lama, working with backward communities in West Nepal, feels that SRHR is a burning issue, globally as well as locally. In her area, STIs and uterus prolapse are very common problems faced by women, but they feel shy to confide even in the health workers, let alone family members. Many school going girls have urinary tract infections which they rarely know about.

Representing the voices of thousands of women, Igrom insisted that SRHR should be a key issue to be addressed in post 2015 SDGs in order to enable women get freedom from forced abortions, from harmful traditional practices, from gender based violence and to help them access appropriate sexual education/information and take decisions that affect their reproductive health.

And yet the post 2015 SDGs have ignored education on sexuality and are quiet on sexual and reproductive health and rights (SRHR) issue. While speaking at the 'South Asia Consultation on Media Engagement in Post 2015 Development Process' organized recently in Kathmandu, Nepal, by International Planned Parenthood Federation (IPPF)'s South Asia Regional Office, Giulia Vallese, UNFPA Representative (Nepal) said that, “A post 2015 agenda should aim at bridging the expanding inequalities and structural barriers that have hampered efforts to realize the MDGs.

Development can only succeed when human rights are respected. Development is about the power of people to find sustainable solutions, the power of people to drive green and inclusive economic growth with benefits that are widely shared across society. There is an urgent need to address the underlying causes of gender inequalities and health seeking behaviour, particularly those affecting the most vulnerable and underserved groups such as adolescents and women, where a clear focus on SRHR is necessary.”

“Increased focus on adolescents and young people is necessary to complete the unfinished work of the MDGs and to effectively implement the post 2015 development agenda. Universal access to reproductive health and protection of reproductive rights for all represent a critical challenge for achieving a dignifying human development and wellbeing for all," she said.

Voicing similar sentiments, Susmita Choudhury of IPPF lamented that SDGs are silent on SRHR, comprehensive sexuality education, and adolescents and youth.These are really missed opportunities as a large population of South Asian countries (440 million) is young and proper investment in this large cohort can reap enormous benefits. Also the information on sex which this young population is getting is often incorrect and full of misconceptions which is responsible for increasing cases of sexual crimes. It is important for them to get correct and proper information to help build their lives.

Amu Singh Sijapati, President FPAN agreed that, “SRHR is very vital and should be at the heart of SDGs. Lack of access to SRH services contributes to gender inequality and disempowerment. Misinterpretation and misuse of traditional customs and religious practices continue to hold back the process of gender equality. We not only need comprehensive sexual education but also gender responsive and rights based healthcare.”

One thing is very clear--we cannot achieve any goal unless we address the issue of health of women/girls. It is also essential to strengthen linkages across goals and targets, and not to treat goals in isolation. Climate has an impact on health, so does education and poverty. Similarly secure land ownership and SRHR empowers women. All of us—media, civil society, governments, UN agencies and other stakeholders-- need to come together as advocates to ensure that gender equality, women's rights and women's empowerment are central to the post 2015 development framework.