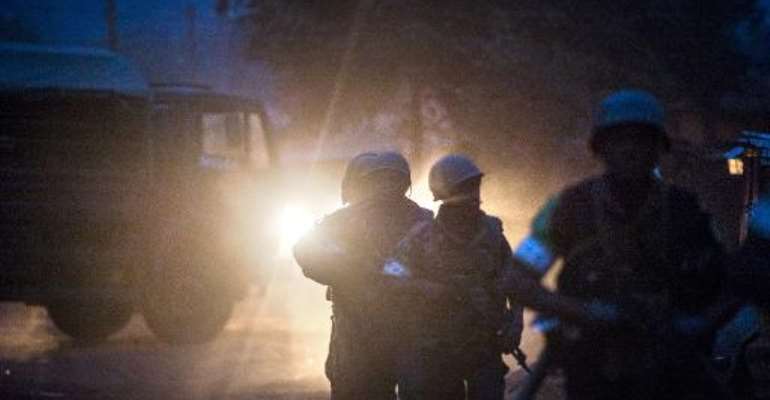 The 7,600-strong UN force known by its French acronym MINUSCA takes over from a smaller UN Security Council-mandated African deployment, MISCA, which has been stationed in the country since December, alongside 2,000 French soldiers.

MINUSCA eventually will be boosted to count 12,000 soldiers and police officers. Many of its initial contingent hail from MISCA's ranks.

In a rainswept ceremony at the airport serving the capital Bangui, the head of the UN's peacekeeping operations, Herve Ladsous, delivered a symbolic blue beret to the Cameroonian general heading MISCA, Martin Chomu Tumenta, who became commander of the MINUSCA force.

"This transfer of authority marks the successful completion of MISCA's mandate and the beginning of MINUSCA's military and police action" in the poor, landlocked nation, UN Secretary General Ban Ki-moon said in a statement from UN headquarters.

He urged rival sides in Central Africa "to put an immediate end to the violence" and enable a political transition to stable, democratic rule.

The country plunged into conflict after a coup in March 2013 by a mainly Muslim rebel alliance, the Seleka, which overthrew president Francois Bozize and made their own man, Michel Djotodia, head of state.

Influential foreign leaders in January forced Djotodia to step down after he proved incapable of preventing widespread atrocities by rogue Seleka fighters.

More than a quarter of the Central African Republic's population of 4.8 million has been displaced by the strife, while only one Muslim district remains in Bangui. Everybody else fled the killings, rape and systematic looting by anti-balaka forces.

With the UN mission taking over, the US embassy in Bangui reopened its doors on Monday, after closing down late in 2012 for security reasons, a diplomatic source said. The new American ambassador, David Brown, has already been serving as senior advisor to the CAR since August last year.

The groundwork for MINUSCA -- which stands for the United Nations Multidimensional Integrated Stabilization Mission in the Central African Republic in French -- was laid down last April by UN Security Council Resolution 2149.

Its task will be a difficult, long-term one. Widespread violence that raised fears of genocide has ceased, but it has provoked a humanitarian disaster in a long-troubled country short on food, health care and key infrastructure.

The crisis follows a long line of coups, army mutinies, rebellions and civil disturbances that have ripped at the fabric of society and plunged most citizens into deep poverty despite the country's agricultural potential and its mineral wealth.

"The state no longer exists in the country. We're up against a void," a Western diplomat said early in September. "People need to rethink everything, rebuild from scratch. And the Central Africans don't have the capacities for that, let's be clear."

"The economy fell apart even before the state," the International Crisis Group stated in a June report on the CAR. It charged that while in power, Seleka forces "asserted control of lucrative trafficking networks (gold, diamond and ivory)".

The think-tank argued that foreign intervention was always limited to "three important but insufficient elements": a military presence, humanitarian assistance, and budgetary aid to prop up the administration. But what counts is "ending a cycle of predatory rule", the ICG argued.

Many people in the CAR are tentatively staking their hopes on MINUSCA, partly because they have become used to repeated interventions during decades of misrule.

"They've tried everything to enable (the country) to undergo a nearly certain stabilisation," said Ange Abdoul, who works in a Bangui bank. "For me, there is always room for doubt" about what MINUSCA can do.