Nana Akufo-Addo Has Been Tried, Tested And Rejected 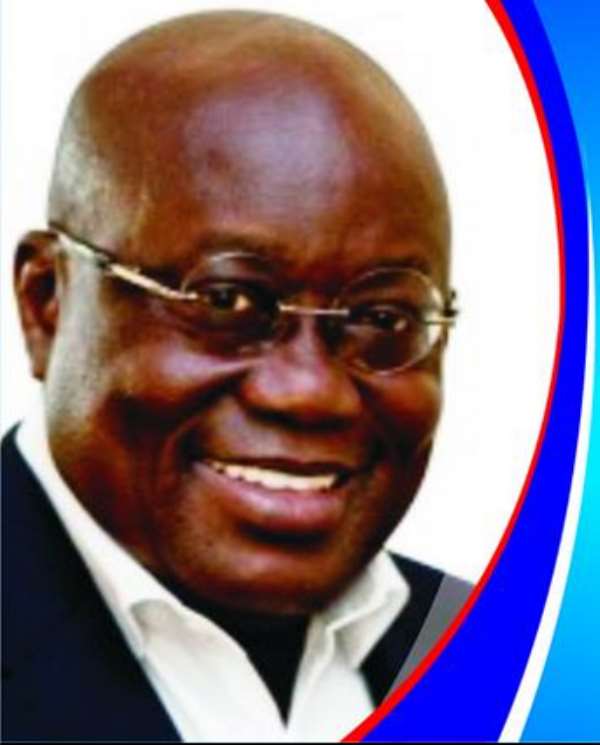 When you ask any NPP faithful why he or she thinks Nana Akufo-Addo can win the 2016 general elections, one of the answers you get is that Nana has been tried and tested as a politician. If you push him or her further to explain the “tried and tested” and link it to the reason why Nana will win in 2016, you get the answer in the below bullets:

• It is Nana's time to be President. Nana is a winner.

• Nana is the most popular politician in the NPP

• Nana is not a corrupt politician. He will not steal our money.

I want to take the reasons the NPP give to make the argument that Nana will win the 2016 general elections, and you the reader will come to the conclusion that Nana has indeed been tried, tested and rejected.

The first time the NPP started saying that it is Nana's time was in 2005. That was immediately after President John Kuffour had won his re-election as the President. So if the NPP has said in 2005 that it was Nana's time, why do they continue to say the same thing in September 2014, and when will they finally stop saying that nonsense? Is the Presidency of Ghana a chieftaincy institution where those who are qualified to be on the stool or skin are arranged?

By the way, who arranged the time for Nana Akufo-Addo that 2016 is his time? Why did he missed his times in 2008 and 2012? The NPP cannot sit in their homes and imagine some dates and assume that the right thinking Ghanaian will buy into their imagination. The Presidency of Ghana is definitely not a chieftaincy institution where we can say it is someone's time. You have to work for it and at Nana's age and health, I am sorry.

On the second argument, you see, the NPP still think that an NPP election is a Ghanaian election. They always have fun electing a Flag bearer but not a President because they still think once they elect a Flag bearer he is automatically the President of Ghana. If the NPP is a serious party, they will begin to think about electing the most popular politician in Ghana and not the one in the NPP.

The third argument is Ghana is “hard” This noise by the NPP started in January 2009 as soon as the late President Atta-Mills was sworn-in. They continue to make the same noise in September 2014. If the NPP started making this kind of noise in January 2009, and by September 2014, they continue to make the same noise, then something is definitely wrong with them. It is either they can no longer do their cocaine business to make money or they are just playing politics with the minds of the average Ghanaian. They just want to come to power and mismanage our resources or “chop” the little resources Ghana have left. Ghana is definitely not as “hard” as the NPP wants us to believe. It's all about politics and cocaine business. Take this from me.

There is an adage that says that if you continue to do the same thing over and over and over again and expect different results, you are a fool. Nana Akufo-Addo cannot use the same party, same message, same crowd and same running mate to go into general elections and expect to win. How does he expect well thinking Ghanaians to believe in his message that he now knows that elections are won at the polling stations? Where has Nana been since 1992 when NPP won in 2000 and 2004?

The final reason why the NPP think Nana can win in 2016 is that Nana is not corrupt. But was President Rawlings corrupt when became President in 1992? Was President John Kuffour corrupt when he became President in 2000? But what do the NPP and Ghanaians say about these two Presidents today? Was Nana Akufo-Addo not the Foreign Minister when 12 diplomatic passports went missing in the ministry and one was found in Singapore with a Ghanaian cocaine dealer? The NPP wants Ghanaians to believe that when Nana is elected President, he is also going to be the Minister of Education, Youth and Sports, Health, Defense, Foreign Affairs, Finance and the rest of the ministries.

If that is the case, then there would not be any corruption in the system. But you and I know that it is impossible. The 2012 NPP National Executive Committee (NEC) were voted out of power due to corruption. Nana Akufo-Addo was the leader of the NPP in 2012, so what happened? In the unlikely event and Nana wins the Presidency in 2016 and any of these NEC members are appointed ministers, what is the guarantee that Nana can stop their corrupt activities in their various ministries? He could not stop them in 2012 and for sure, he cannot stop them in 2016 because they are all one in the same boat.

As you read this article, read the newspapers and watch television, have you heard anywhere that seems to suggest that the NPP is going to do something different from the ones they did in 2012? Have you heard whether they have added even one person to their membership? If anything at all, there is more tension in their party now than in 2012. The party is more divided than the one they had in 2012. If 756 out of 5 million people vote in their primaries and one person get 80% of the votes, Nana of all people, calls that “unity” in the party.

The best thing the NPP know how to do is talk and make empty noises. The year 2016 will come and go and they will continue to say its Nana's time, Ghana is “hard” and Nana is the most popular politician in the NPP. Maybe that will be the time they will realize that Nana has indeed been tried, tested and rejected. The Alan faction would say, “We told you so” and the Nana faction would also say, “We will bring him back in 2020” The victory of NDC and President John Mahama would have been history. God's willing.