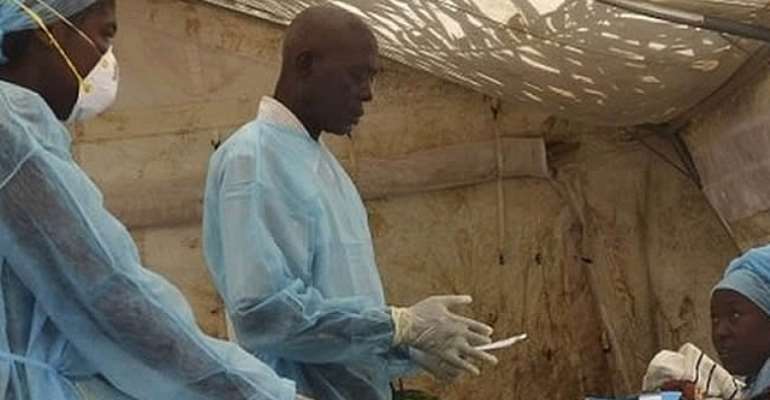 Health officials in the Ashanti Region say they have completed work on the only designated isolation centre for Ebola in the region.

There are however challenges with training and public education on the deadly disease due to financial difficulties.

The Ebola virus is currently spreading across West Africa and is believed to have killed over 2,000 people in Guinea, Liberia, Sierra Leone and Nigeria since the recent outbreak began in February, according to the World Health Organisation (WHO).

Ghana has so far investigated 37 suspected cases of the deadly virus with all turning out to be negative.

Government has put in place measures to contain the disease if it is detected in the country.

Luv FM's Erastus Asare Donkor, who visited some medical facilities to assess the region's preparedness for the deadly disease, reported that some of them are financially handicapped.

Every health facility is required to have a holding bay with the regional isolation centre designated at Kumasi South Hospital.

However, only the Komfo Anokye Hospital has managed to set up a bay using internally generated funds. A few others, Erastus added, have designated wards for the purpose but with little or no equipment.

At the Kumasi South Hospital, Erastus Asare Donkor observed that, the holding bay is a small structure, the size of a bedroom, which is close to the hospital's maternity ward.

The facility, which can hold a maximum of four patients at a time, used to be a resting place for a contractor who worked on a project at the hospital.

Dr Angela Frimpong, who took Erastus on a tour of the facility, said the facility is equipped enough to handle confirmed cases of Ebola.

Erastus Asare Donkor noted that investigations have revealed that there are serious financial difficulties and regional health officials are struggling to find money for training and public even if they are reluctant to admit it.

According to him, government subvention for 2014 is yet to be released to the regional health directorate and about GHc9, 000 earmarked for training has not hit the directorate's account. Some health facilities have themselves paid for training for personnel, he reported.

Some members of the general public have varied views on the Ebola virus. One person who spoke to Erastus said the virus is spread by bush meat and food contaminated by animals can also cause Ebola.

With the nation now caught up with the use of sanitizers as a means to prevent the virus, Dr .  Ellis Owusu - Dabo, Scientific Director at the Kumasi Centre for Collaborative Research in Tropical Medicine warned sanitizers don't prevent Ebola.

“People should use the hand sanitizers but it doesn't prevent Ebola. It helps largely against bacteria and when the manufacturer says it is indicative of killing viruses then those specified virus [it] can help,” he warned.

He advised that, “The first thing that people can do is wash your hands thoroughly under flowing tap water.”