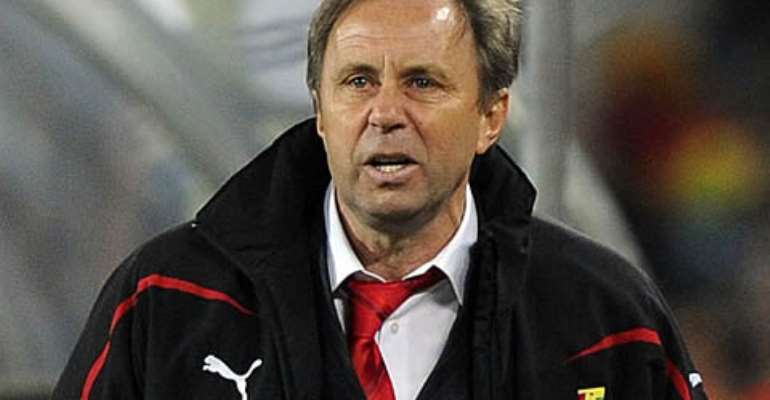 The Ghana Football Association has denied media reports that former Black Stars head coach Milovan Rajevac is demanding a monthly salary of $70,000 before he returns to the job.

Spokesperson for the GFA, Mr. Ibrahim Saanie Daara, told Myjoyonline.com that the FA is not engaged in talks at all with the coach currently, for him to be demanding that amount as salary.

He said the process to appoint Mr. Rajevac as a technical director for the Black Stars has been abrogated.

The FA, he said, has rather invited applications for the vacant position of head coach following the dismissal of Kwasi Appiah last Friday.

It is only when Milovan Rajevac applies and is selected that the terms of his employment will be discussed, Saanie Daara maintained.

Footy-gahana reported Sunday that “Former Black Stars head coach Milovan Rajevac is now demanding a monthly salary of $70,000 before putting pen to paper on a return to the role he left in 2010.”

The website quotes “well-placed sources” as saying “Rajevac had agreed in principle to a 2-year-deal with the Ghana Football…but made his demands when the matter of figures came up.”

In addition to the salary demand, the Serbian was also reported to have indicated that he will bring in an assistant coach and an interpreter; both of whom will also draw salaries from the GFA.

These demands, the report said, are the reason the GFA has called for other interested candidates to apply for the job.

The Ghana FA has put a one-week timeline for people to send in their applications and will officially shut it by 5pm next Friday, September, 19.

The GFA Spokesperson said the report could not be correct because the Association is still accepting applications for the position of head coach for the Black Stars and is not having any discussions with Milovan Rajevac.

The Serbian served as Black Stars head coach from 2008 to 2010 and the period took the Local Black Stars to the first edition of the Championship of African Nations (CHAN) final in 2009.

He led the Black Stars to the African Nations Cup final a year later and took Ghana to the quarterfinals of the 2010 World Cup in South Africa.

He subsequently quit the job and is now seeking to return.