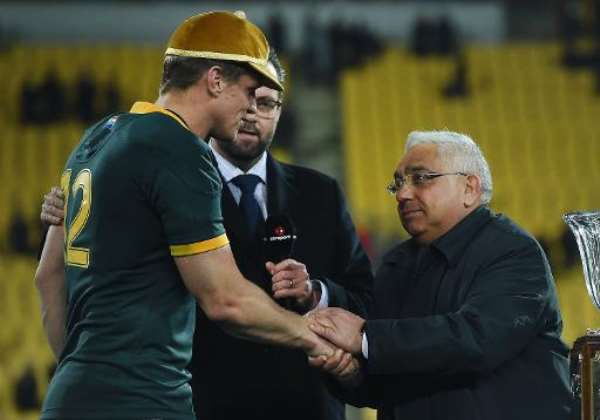 Wellington (AFP) - The Springboks put a positive spin on their narrow defeat to the All Blacks in a bruising encounter on Saturday, saying they learnt valuable lessons a year out from the World Cup.

The 14-10 defeat in Wellington all but ended the Springboks bid to prevent the All Blacks claiming the Rugby Championship trophy for a third successive year.

It also came at a price, with scrum-half Ruan Pienaar out for up to eight weeks with knee ligament damage and a question mark over flanker Francois Louw who suffered an arm injury.

But in the plus column, coach Heyneke Meyer saw a valuable return from his gamble to play 20-year-old Handre Pollard and 21-year-old Jan Serfontein against the top side in the world.

He said it added to their growing player depth in the build-up to the 2015 World Cup, which starts in England next September.

"There's not a lot of time left before the World Cup but I'm really happy with the depth of our squad," Meyer said when weighing up the Springbok performances in back-to-back losses against the Wallabies then the All Blacks.

"We didn't win these two games, but we've brought a lot of youngsters through. We've got a great squad now.

"I'm really looking forward to the World Cup because by then we will have had time with the players and that makes a huge difference."

The unbeaten All Blacks, who need to win one of their two remaining games to win the southern hemisphere tournament, enjoyed 61 percent of possession and territory against the Springboks.

They also dominated most of the other key statistics yet they found points hard to come by.

Instead it was the Springboks, widely written off before the game, who rallied to stage a late comeback.

Although the desperate All Blacks defence denied the Springboks a match-winning try, captain Jean de Villiers said they gained confidence going into the return match in Johannesburg on October 4.

"We definitely believe we can beat them, but it is much easier said than done," he said pointing to concerns about turnover ball from first-phase possession.

"It's just an attitude thing and maybe a bit of concentration. We're backing our systems and we do believe we are getting better as a team and when we get to Johannesburg we've got to back ourselves to get a different result there."

The All Blacks, who lost inside centre Ma'a Nonu for the rest of the year with a broken arm, were critical of their own performance.

"In the first half, we were on the back foot a little bit. They were getting the edge at the contact area," captain Richie McCaw said.

"We were forced into some poor decisions, poor kicks, a bit of poor handling too and when you do that too often against a team like that you put yourself under pressure."

The All Blacks points came from a McCaw try, two penalties by Aaron Cruden and a penalty from Beauden Barrett.

Cornal Hendricks scored a try for South Africa, who led 7-6 at half-time, while Pollard landed a conversion and a drop goal.