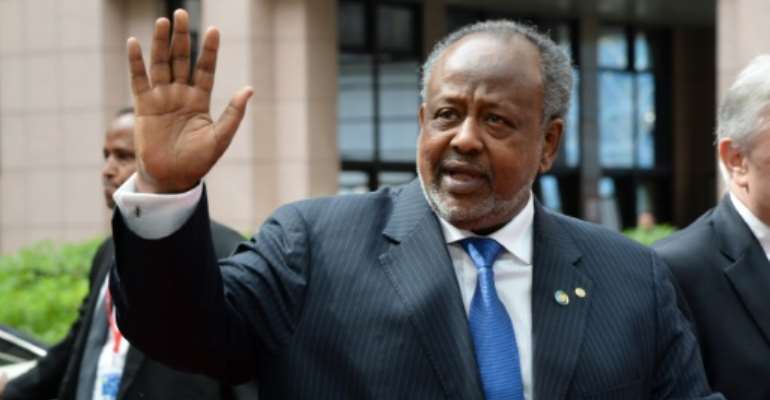 Djibouti (AFP) - Djibouti's President Ismail Omar Guelleh, in power since 1999, was re-elected Friday for a fourth mandate, the prime minister announced, following an election boycotted by some opposition parties.

"According to our projections, we can say that the UMP candidate (Guelleh of the Union for the Presidential Majority) has been elected in the first round" following Friday's election, Prime Minister Abdoulkader Kamil Mohamed announced on national television.

As with the previous election in 2011, the announcement was made before all the votes were in, but with the 68-year-old Guelleh said to be easily above the 50 percent threshold required to avoid a second-round of voting.

The incumbent was credited with receiving around three-quarters of the votes cast in the capital and its populous and dilapidated Balbala suburb, which together make up about 60 percent of the population of the tiny Horn of Africa nation.

"The people of Djibouti have followed the path of wisdom, stability, security and development," said the prime minister.

Some opposition parties had called for a boycott of the election, as they had done in previous elections, and with turnout low throughout the day the electoral commission extended polling by an hour to 1600 GMT.

Six candidates were vying for the presidency in a country whose location at the gateway to the Red Sea has attracted powers such as the United States, France and China as a prime location for military bases.

Guelleh was always the clear front-runner against a fractured opposition in the former French colony.

Looking relaxed and smiling, the head of state cast his vote in the centre of Djibouti City earlier in the day accompanied by his wife.

Several opposition candidates complained that their representatives had been turned away from a number of polling stations.

With a population of 875,000 people, Djibouti is little more than a port with a country attached, but it has leveraged its position on one of the world's busiest shipping routes.

It is home to Washington's only permanent base in Africa, which is used for operations in Yemen -- just across the Gulf of Aden -- as well as the fight against the Islamist Shebab in Somalia and Al-Qaeda in the Arabian Peninsula (AQAP).

Guelleh won the last election in 2011 with 80 percent of the vote, after parliament changed the constitution to clear the way for a third term.

Following parliamentary elections in 2013 which Guelleh's UMP won with 49 percent of the vote sparking furious opposition claims of fraud, rival parties demanded the creation of an independent electoral commission -- which has never happened.

Opposition groups have complained of curbs on freedom of assembly ahead of the vote, while rights groups have denounced political repression and crackdowns on basic freedoms.

This week a BBC team was detained, interrogated and then expelled after interviewing an opposition leader.

Djibouti has launched major infrastructure projects aimed at turning it into a regional hub for trade and services, using money largely borrowed from China, which is planning to build a military base there.

Despite the investment and perky economic growth, four out of five people live in poverty.