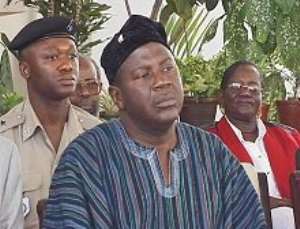 Paga (U/E), June 8, GNA - Vice President Aliu Mahama on Monday advised communities that want to come together for the creation of new districts to collectively decide on the location of their district capitals and use the due process of law to pursue their proposal. He said the situation, where every town and village was demanding to host the district capital was unhealthy and detrimental to the socio-economic progress and the peace of the areas.

Vice President Mahama gave the advice when he addressed durbars held in his honour in the Kasena-Nakana District.

The chiefs and regents in these areas appealed for the creation of a Nakana District. But nearly all of them preferred that the capital be cited in their areas.

Vice President Mahama explained that the creation of districts, which is aimed at facilitating development in every corner of the country, would be continued in phases.

However, it was unrealistic to site the district capitals in every community, adding that the 28 new districts formed the first part of the programme.

He said adequate infrastructure would be provided in the new districts and their capitals to improve the standard of living there. The Vice President advised the youth to learn skills that would enable them to contribute substantially to the growth of their areas. He announced special financial agricultural, education, roads and health packages for the areas he visited.

At a durbar held at Navrongo, Vice President Mahama said the Government had released 640 million cedis to provide credit to tomato farmers in the District, who lost their harvest in the last season. He said 900 million cedis had also been released to start the first phase of the rehabilitation work on the canals at Tono.

The Government had also planned to construct six dams to sustain agricultural activities all year round and to prevent the youth from migrating to the South in search of jobs, he announced.

A credit facility of 1.8 billion cedis had also been made available.

The dams would be protected from siltation by the cultivation of grafted mangoes around them.

The mangoes, which are to be planted on a large scale (5,000 seedlings), would also support the income of the people. Additionally, Aliu Mahama said 300 locally manufactured windmill technology pumps for irrigation would soon be piloted in the District. One windmill can irrigate 10 hectares.

On education, Vice President Aliu said 111 million cedis had been released to provide scholarship for children from poor homes and orphans.

The District is also among the 40 deprived, which would be supported with nine billion cedis to pay for school fees for pupils in basic schools.

The Navrongo Senior Secondary School, he said, had been selected for upgrading into a model institution in line with Government's policy to bring quality education to the doorstep of rural communities.

Vice President inaugurated 587 million cedis dam funded under the Village Infrastructure Programme (VIP) at Akurugudabo. He advised the Irrigation Company of Upper Region (ICOUR), which constructed the six-hectare facility to properly maintain it to save it from silting up.

At Sirigu, Vice President Mahama visited the site of the internationally known Sirigu Women Organisation of Arts and Pottery and commended them for providing exceptional skills in pottery, painting, weaving and other handicrafts to the youth.

He also inspected the progress of work on the Kadinga - Nandango road, which is being rehabilitated at the cost of 1.2 billion cedis to make the communities easily accessible.

At Manyoro, Vice President announced the construction of dams valued at 1.1 billion cedis for the community.

The Vice President also addressed a durbar at Paga, where he pledged that their request for an improvement in telephone services and extension of electricity to all communities would be considered.

In all the communities the chiefs and regents commended the Government for the development projects so far offered them. Earlier the Vice President inspected the progress of work on the upgrading of the Bolgatanga General Hospital at the cost of 80 billion cedis.

In four phases two contractors would build an Out Patient Department; Administration Block, Fence Wall and renovate the Maternity Block and provide other facilities.

However, a dispute over compensation for part of the land acquired before 1960 have stalled the construction of Doctors' flats. Vice President Aliu expressed worry about the negative development and appealed to the Bolga Naba, Martin Abilba III to endeavour to resolve the problem while the Regional Administration worked to meet the demands of the stakeholders.

Vice President Mahama visited two sports commentators, Messrs Kofi Asare Brako and Dan Kweku Yeboah of Peace FM, who were on admission following injuries they sustained in a motor accident on their return from Burkina Faso, where they went to cover the World Cup qualifying match between the Black Stars and the Stallions of that country. He wished them well.

The visit formed part of a week outreach programme of the Vice President, aimed at eliciting the views of the people at the grassroots level to inform the formulation of national policies and programmes. 08 June 04