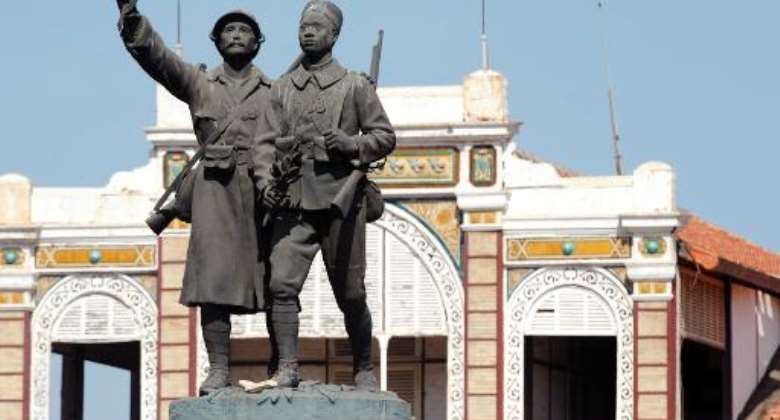 The Demba and Dupont statue, a World War I memorial commemorating the fallen and honouring the brotherhood between Senegal and France, pictured at the Rifleman's Square in Dakar, on November 10, 2013. By Seyllou (AFP/File)

Tsavo (Kenya) (AFP) - On Kenya's vast Tsavo plains where lions lurk in yellow grass little has changed for a century: including bitter memories of those killed in bloody colonial battles of World War I.

Far from the freezing mud trenches of Europe's Western Front, the rocky ditches and stone forts where soldiers fought and died under the blazing equatorial sun still remain today.

Mwamkono Mwavaka's grandfather was forced to serve as a porter for the British army, one of tens of thousands of Africans pressganged into the "forgotten" battles that raged here between British and German colonial forces.

Chochola died in the war, and a lock of his hair was returned home as proof of death. But more men were needed on the front and his son -- Mwavaka's father -- was then taken too.

"When his hair was brought, the others grabbed his son and took him away," said 75-year-old Mwavaka, who lives in a simple tin-roof home close to the now overgrown battlefields.

"People said: 'His own father has died while there, now this one will also go to die there?' So, people really cried back home."

His father survived, but many were not so lucky.

Tens of thousands of Africans from what is now Kenya and Tanzania were recruited by both Britain and Germany as porters, often forcibly.

Some 105,000 men died on the British side, the vast majority porters, the same number as British casualties in the 1916 Battle of the Somme in France.

More than 45,000 men from what is now Kenya died, equivalent of at least one in eight of the country's male population, according to historians, with some putting the figure far higher.

There are no records of how many Africans died on the side of the Germans, who recruited men from what is now Tanzania, then Tanganyika.

"They suffered terribly here, and we should remember that," said historian James Willson, crouching down in the snaking remains of a trench near Taita Taveta in Kenya's southeast, close to the border with Tanzania.

Willson waves at ancient tree stumps around the remnants of the trenches, the wood broken by the powerful trunks of the elephants who still stride across the plains, not the artillery guns that once pounded shells here.

"The troops didn't have the rat-infested trenches, with the mud and dreadful shelling of Flanders... but here they had snakes, the heat, all sorts of diseases, and water was a very precious commodity."

Back in 1914, the region was also the frontier between British and German East Africa, close to the strategic railway line into the interior to Kenya's highland capital Nairobi, some 300 kilometres (190 miles) to the northwest.

"To call the Great War in east Africa a 'sideshow' to the war in Europe may be correct, but it is demeaning," said Paice, author of a book on the conflict.

"The scale and impact of the campaign were gargantuan," he added. "The death toll among combatants and civilians was colossal."

The rubbish of war is still being plucked out of the ground.

"We used to come out with the kids when they were smaller and go round the sites and we could still pick up bullets, bits of metal," said Iain Leckie, who runs Lions Bluff, a safari lodge perched on a cliff top overlooking plains dotted with elephants and giraffe.

The four-year campaign was the longest of the war.

"It was the only campaign that the British did not win," said Willson, author of Guerrillas of Tsavo, an account of the fierce battles there.

"The Germans were asked to surrender at the end, 14 days after the armistice, and it's down in the record books as one of the toughest of the campaigns."

"It was civilian populations throughout East Africa who suffered worst of all in this final phase of the 'Scramble for Africa'," added Paice.

The National Museums of Kenya and local tourist lodges are setting up battlefield tours to help keep the memories alive.

For many in Kenya, the stories of their great grandfathers' battles are fading, but Leckie said he hopes that battlefield tourism can help bring alive the scenes of bullets, blood and sacrifice that marked these hills 100 years ago.

"Everything in Africa fights the bush taking over... so to be involved in a little bit of preserving history and bringing outsiders to visit, is great," Leckie added.