Debate: What do post-2015 strategic development goals mean to us? 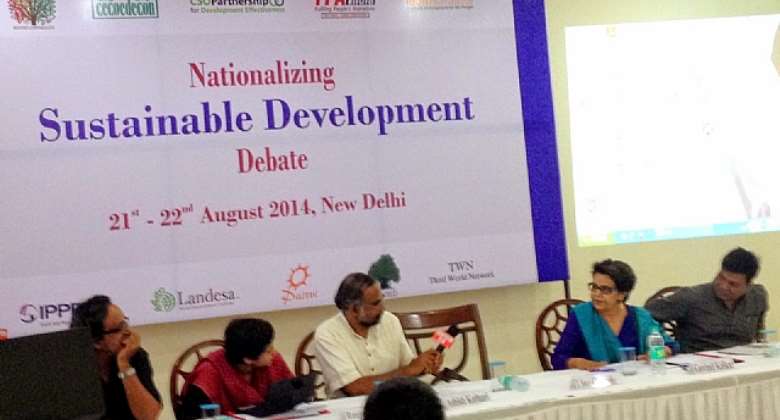 In the year 2000, countries of the world had agreed to meet the 8 Millennium Development Goals (MDGs) by 2015. Numerous consultative processes have been taking place around the world on what should be the development goals post-2015. A draft list of 17 Strategic Development Goals (SDGs) and 168 targets for post-2015 is expected to be presented before the UN General Assembly in September 2014 to agree on modalities and inter-governmental negotiations might begin from January 2015 onwards.

Engaging civil society representatives from diverse sectors such as agriculture, land rights, gender justice, health justice, ecological justice, trade, political reforms, among others, in a consultative process around the post-2015 SDGs is extremely critical for informing country delegations. These discussions and debates around post-2015 SDGs should shape country positions at international negotiations. In India, such a consultative debate was organized in Delhi on 21-22 August 2014 by a range of organizations and networks such as Third World Network (TWN), PAIRVI, Beyond Copenhagen, Cecoedecon, Family Planning Association of India (FPAI), International Planned Parenthood Federation (IPPF), CSO Partnership for Development Effectiveness (CPDE), South Asian Dialogues on Ecological Democracy (SADED), IBON International, LANDESA, among others.

“The world is growing more unequal and unsustainable resulting in crises of sorts, which has resounded in myriads upheavals throughout the world” said Ajit K Jha of PAIRVI while opening the debate on SDGs.

MILLENNIUM DEVELOPMENT GOALS (MDGs) FOR 2015: TAKING STOCK
Those who were involved with MDG processes in 2000, will recollect the relative ease with which different countries of the world arrived at a consensus to meet the 8 goals by 2015. Nearly 14 years later, post-2015 negotiations are far from that 'easy consensus' – perhaps rightly so. Dialogue is indeed central to the process around post-2015 discussions with diversity and inequalities that exist within and between nations.

Govind Kelkar, a senior advisor to LANDESA, remarked out of the 8 MDGs, countries have failed significantly to meet at least two MDGs: MDG 8 which relates to global partnership for development and MDG 3 which calls for promoting gender equality and empower women.

Govind commented regarding MDG 2 (achieve universal primary education) that 70% of girls globally are in schools and 90% of total children are in schools. She said that primary schooling has improved over the years.

There has been very limited progress on MDG 3 (promote gender equality and empower women). Govind reflected that development of indicators was a challenge from the start regarding MDG 3. Education of girls has improved only at primary level but not at secondary or higher technical education level. With regards to economic rights and political participation of women, there was no indicator for economic rights but political participation in parliament has somewhat improved, said Govind.

MDG 6 (combat HIV/AIDS, malaria and other diseases) is where countries are showing some progress but challenges remain. Over 9.5 million people living with HIV are on antiretroviral therapy (ART) globally, malaria control has been on track in most nations. But challenges remain, believes Citizen News Service (CNS). Antibiotic drug-resistance for instance is alarming in most developing nations which has serious repercussions for disease control programmes such as those of tuberculosis (TB) for instance. Non-communicable diseases (NCDs) such as heart-disease, stroke, cancers, diabetes, mental health, asthma, among others have been escalating despite the fact that common shared risk factors are well identified (tobacco control, unhealthy diet, lack of exercise, excessive alcohol intake, among others).

MDG 8 (global partnership for development) is one of the most failed goals, said Govind as countries of the south blame north and those of north blame south for not partnering effectively.

Underlining inequalities within countries and widening gap between 'haves' and have-nots', Pooja Parvati of Oxfam India remarked: “What about the 'north' in the 'south' and 'south' in the 'north'?”

WHAT GOALS SHOULD WE HAVE TO MEASURE DEVELOPMENT AFTER 2015?
In past one and a half years, 13 open working group (OWG) sessions took place to produce a draft list of 17 Strategic Development Goals (SDGs) with 168 targets (17 SDGs are online here).

Ranja Sengupta of Third World Network (TWN) said that this list of SDGs provide a framework to work with but is indeed a minimalist agenda to some extent too. During OWG negotiations, north-south divide was sharp. After lot of discussions and negotiations around polarized positions of developed and developing nations, these draft SDGs have been listed. For example, agreeing that these goals are also for developed countries and not just for developing nations was important so that all onus is not just on the developing nations but on all nations. Similarly on issues such as environment, lot of 'common but differentiated responsibilities' (CBDR) need to be shouldered by all nations, including the rich nations. Inequality within nations and between nations was also prominently articulated in these goals.

Countries wanted to keep their 'policy space' safe so that they can adapt policies in their local contexts. This might be a double edged sword because on one hand it protects sovereignty of nations to have their own policies but on the other hand does not give any handle to SDG mechanisms to hold countries accountable for policies that are problematic in terms of human rights and social justice.

There was lot of resistance to sexual rights, which were finally dropped off the list of SDGs. Despite resistance reproductive health and rights got included in SDGs, as of now.

THREE PARALLEL PROCESSES FOR POST-2015 GOALS
Ajit K Jha of PAIRVI said that there were three parallel processes around post-2015 discussions. One was OWGs which have now concluded with list of 17 SDGs and 168 targets. Another process was Intergovernmental Committee of Experts for Sustainable Development and Financing, which has just concluded after 10 sessions (July 2013-August 2014). Third process is High Level Political Forum (HLPF), which has replaced the Commission on Sustainable Development. All three processes are intergovernmental in nature and participation of civil society representatives is possible subject to approval.

HLPF is unique in a way that it is rooted not just in UN Economic and Social Council (UN ECOSOC) but also in the secretariat of UN General Assembly. Another unique aspect of HLPF is that its resolution supports regional processes to feed in, but the other two processes mentioned above are largely 'New York centric'. So HLPF has 5 regional offices globally that are supposed to facilitate preparatory processes with participation of different countries and groups. However the sad aspect is that at national level there is no effort from the government to hold consultations with civil society around post-2015 discussions. The positive aspect is that civil society is indeed reaching out to engage consultative debates with a range of sectors as well as parliamentarians. Two parliamentarians of ruling party government in India participated in this consultation, one of whom promised to engage other parliamentarians for a dialogue with civil society around post 2015 discussions soon.

WHAT HAPPENS WHEN COUNTRIES DO NOT MEET SDGs
This is a missing link as there is almost no mechanism to hold countries accountable on not implementing SDGs rather such accountability mechanisms exist only in other regulatory frameworks such as WTO, etc. Protecting SDGs from corporate capture is another challenge. With negotiations slated to begin in January 2015, let us hope people centric issues take centre-stage to change the world post-2015.